One clever young man decided to secretly use the webcam outside the New York City Apple Store on 5th Avenue to propose to his girlfriend.

We’ve all seen wedding proposals on the JumboTron at arena sporting events before. But you’ve probably never seen a time-lapse webcam proposal. One clever young man decided to secretly use the webcam outside the New York City Apple Store on 5th Avenue to propose to his girlfriend.

To help document the excitement surrounding the June 2006 grand opening of the 5th Avenue store in New York City, Apple set up a special time-lapse webcam outside the entrance. The purpose of the webcam was to capture the crowds at the store during its first 24 hours.

The opening of the new 24-hour retail store was a huge success. The store opened at 6:00 pm to massive crowds. By midnight, the lines starting to die down. By 1:00 am the crowd control barriers were removed. And by 3:00 am the crowds had vanished. But if you keep watching the time-lapse video, something unexpected happens.

Sometime after 5:00 am, an unknown man stands in front of the webcam with 3 giant pieces of paper. The first piece of paper just has a name: Uschi Lang. The second piece got a little more personal: I love you. And the third piece gets to the point. It said: Will you marry me? This clever young man used the webcam at the Apple Store grand opening to do a time lapse wedding proposal. His proposal will forever be immortalized as a footnote in Apple history.

Did She Say Yes?

So after watching this video, your first question will probably be “Did she say yes?” According to Jason Kottke from kottke.org, Uschi Lang did indeed say yes. Apparently, Uschi and her fiancé, James (that’s his name by the way), were both in line earlier that night for the Manhattan 5th Avenue Apple Store grand opening. While in line, James noticed the camera and got the webcam proposal idea. While Uschi was sound asleep, James snuck out of bed around 4:30 am, grabbed some giant pieces of paper and went back to the Apple Store. He then held up his 3 signs for 5 minutes each to make sure that they were captured on video. Those were probably some of the longest minutes in his life. If you watch the video carefully, you can see several people staring at him like he’s nuts. 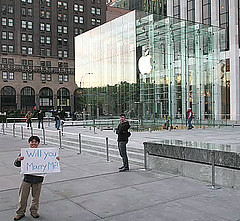 So was Uschi watching the webcam at 5 am when James was holding up the signs? If not, how did he present the video to her? After hundreds of blogs starting speculating on the rest of this story, Uschi decided to send another email to kottke.org with some more of the details:

“… a few days later, James set up a romantic trail of candles leading up to his G5, showed Uschi the video — which she had not seen despite some coverage on the web — and she of course said yes.”

And there you have it. The full story behind the Apple Store webcam wedding proposal. Was it nerdy? Yes, but it was also timeless, opportunistic and creative. Let’s just hope that James and Uschi have a long and happy marriage. Not everyone gets their wedding proposal forever preserved in a time-lapse video on Apple.com. Not to mention that it was immortalized online by thousands of bloggers (including this one).

How To Make A Coke And Mentos Rocket That Goes 100-Feet In The Air
Next Post:Songwriters get tips on how to beat the odds