Clever transit riders poke fun at Canadian flu vaccination campaign by modifying flu prevention posters to say "Protect Yourself And Others From The Flute".

May 17, 2014 by Joe Michaels
FacebookTweetPinLinkedIn

The Public Health Agency of Canada has a warning for everyone riding their public transportation system:

Protect yourself and others from the flu.

But some clever transit riders have modified the warnings with some hilarious graffiti. They’ve added extra letters to the word “flu” to make it spell “flute” and a flute to an image of a man covering his face.

Protect Yourself And Others From The Flute?!

The vandalization of these flu prevention posters is both hilarious and such a great example of Canadian humor. Hopefully, Jethro Tull doesn’t have any tour dates planned in Canada anytime soon. It would be a shame if these flute warnings prevented people from enjoying some great flute rock. 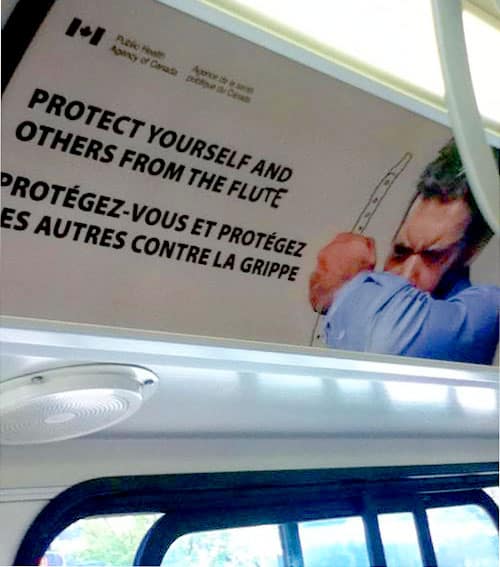 All jokes aside, as a nation, Canadians are very proactive when it comes to flu prevention and willingness to get an annual flu vaccine. Between 1/4 to 1/3 of the total Canadain population gets a flu shot every year.

Left Hand Drive Driving Orientation – The Biggest Failure Of The British Empire
Next Post:Samsung Galaxy S5 Review: The Cool New Features You Need To Know About (2014)