The first chip to pack more than two billion transistors has been launched by silicon giant Intel.

The quad-core chip, known as Tukwila, is designed for high-end servers rather than personal computers.

It operates at speeds of up to 2GHz, the equivalent of a standard PC chip.

It marks the latest milestone in chip technology; Intel released the first processor to contain more than one billion transistors in 2006.

The chip industry is driven by Moore’s Law, originally articulated by Intel co-founder Gordon Moore in 1965.

The industry axiom states that the number of transistors it is possible to squeeze in to a chip for a fixed cost doubles every two years. 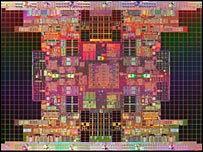 In 2004, the equivalent processor to Tukwila contained 592 million of the tiny switches.

Although the new chip packs more than 2 billion transistors it operates at a relatively modest speed of 2GHz, the equivalent of many PC chips.

Last year IBM released what was described as the “world’s fastest commercial chip” that operates at 4.7GHz.

A large number of the transistors on the new Intel chip are used for memory.

“[It] contains lots of onboard memory and registers which are just a very efficient computer architecture to process data faster,” said Mr Penn.

Cache memory holds data to be processed by the chip. The closer it is to the processor, the quicker the data can be crunched.

“It’s like the difference between getting food from the fridge, rather than from the corner shop,” said Mr Penn.

“The very early microprocessors had no cache memory onboard – it was all off chip – and now they have as much as they can fit on within the chip size limitation,” he said. Mr Penn. “That’s an ongoing trend.”

How to Reset a Frozen iPod
Next Post:Croatian Smurfs Fail World Record Attempt (2008)