THE SHOW “House of Cards”

WHENWHERE Tonight at 8 and midnight; Saturday night at 7 and 10; Sunday night at 9, and other showings, on CNBC

REASON TO WATCH A remarkably clear overview of the financial debacle that has put us all in this fine mess.

WHAT IT’S ABOUT The first frame shot is of an e-mail from (presumably) some Wall Street greed monster who writes, “Let’s hope we’re all wealthy and retired by the time this house of cards collapses.” That was written in 2006, and I think I speak for us all when I say – let’s hope this guy didn’t get his wish.

“Cards,” reported by the savvy David Faber, begins with a walk through a blighted Florida neighborhood, where cockroaches hang from doors, and clouds of mosquitoes hover over pea-green pools. A sheriff who has just turned out yet another family recalls the words of one little boy: “How is Santa Claus going to find me – now?”

The broadcast heads out west to the crucible of the mortgage boom – Orange County – and just when you start to think that everyone who got sucked into the subprime snake pit was a greedy dupe or moron, you meet one Cynthia Simons of Compton. She moved to her house in Yorba Linda after her husband got death threats for testifying in a trial against the men who robbed and beat him. She was a ready mark for an unscrupulous mortgage broker.

Faber talks to many people who were involved in the subprime boom and its collapse. There’s also a probing interview with former Fed chief Alan Greenspan. Faber even travels to Norway to find a town nearly ruined by an exotic security specimen called a collateralized debt obligation. You’d think mea culpas would abound, but he uncovers none: Even Greenspan admits there was nothing he could do to avert one of the great economic crises of modern history.

BOTTOM LINE Because this superb piece of explanatory journalism debuts in Thursday night prime-time mayhem, it might need to be seen at another time. A terrible shame if it’s not, because we need to see and absorb cautionary accounts like this – one with its eyes wide open and the right questions asked. “House of Cards” is the single best account of the collapse I’ve seen anywhere. 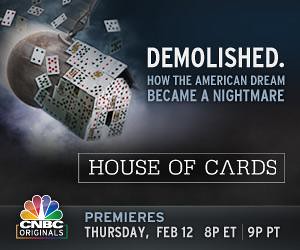 FacebookTweetPinLinkedIn
Category: Internet Tag: house of cards, NBC
Previous Post:History of the Internet
Next Post:Restart a Frozen iPhone or iPod