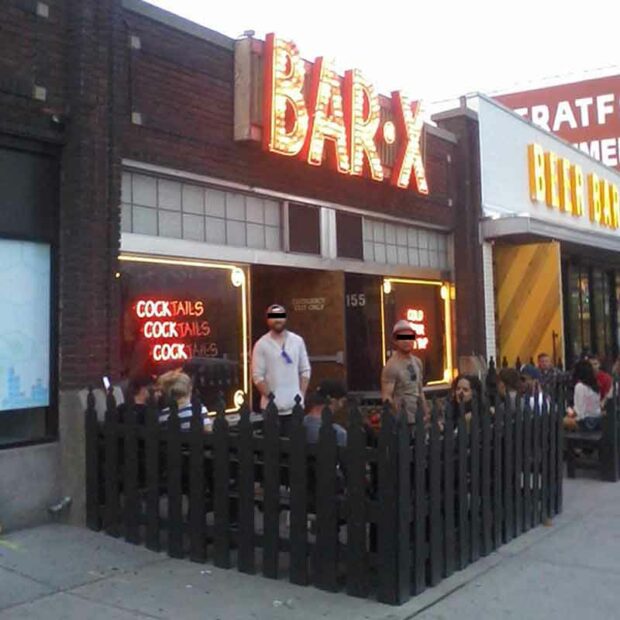 Bar X, the famous bar in downtown Salt Lake City, needs to pay closer attention to their Cocktails sign. It looks like the right side of the sign burned out making the sign say “Cock, Cock, Cock.” 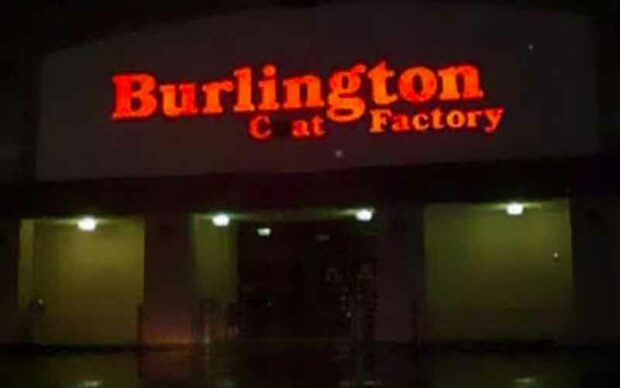 Did you ever wonder where cats come from? Apparently they are made in the Burlington Cat Factory.

If you hate Starbucks Coffee, then this “Sucks Coffee” sign fail will probably make you smile. 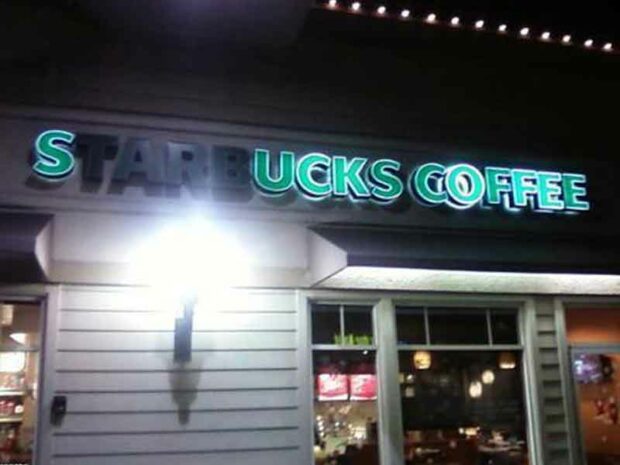 Without the letters E and S in their sign, the Elmhurst Emergency & Trauma Center hilariously becomes “I’m Hurt”.

Properly spelling “angus” in signs is a major problem for restaurants like McDonald’s. Employees accidentally spell angus as “anus” all the time. Unfortunately it looks like the G burned out at this Black Angus Steakhouse sign renaming it the very awkward “Black Anus” Steakhouse. 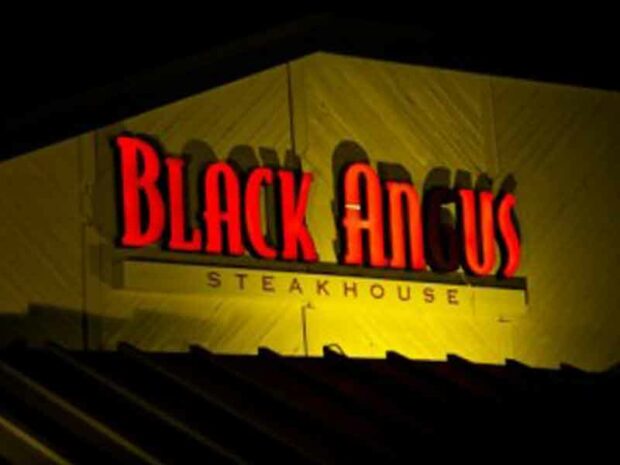 The B and the Y in Crabby Dick’s burned out. The end result is a new restaurant called Crab Dicks. Any guesses on what its featured menu item is? 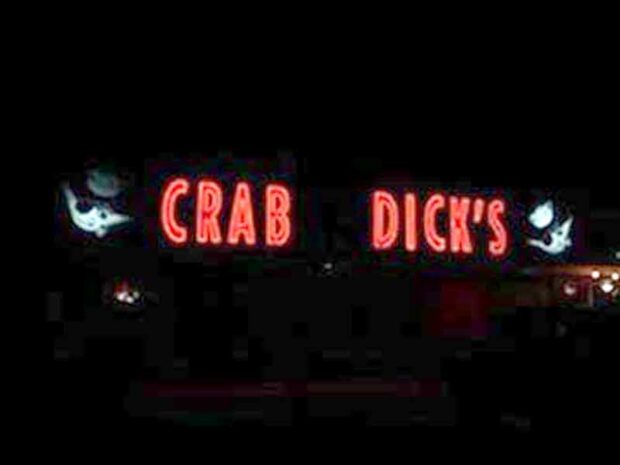 In case you don’t like your own butt, you can always rent a new one from Buttrey Rental after the R, E and Y burns out. 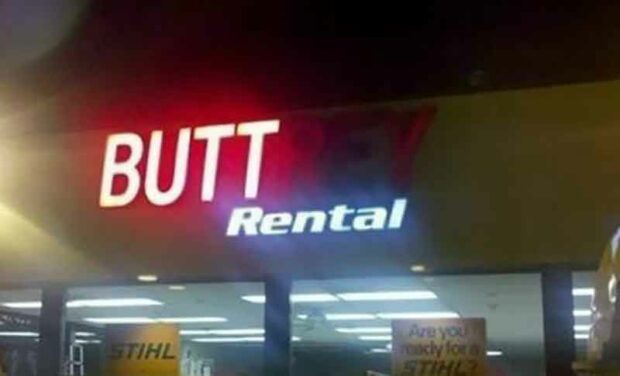 Rothschild Liquors became “Child Liquors” when “Roths” burned out in their neon sign. As outrageous as a “child” liquor store might sound, the legal drinking age is 15 or 16 and over in countries like Central African Republic, Palestinian Authority and Germany. 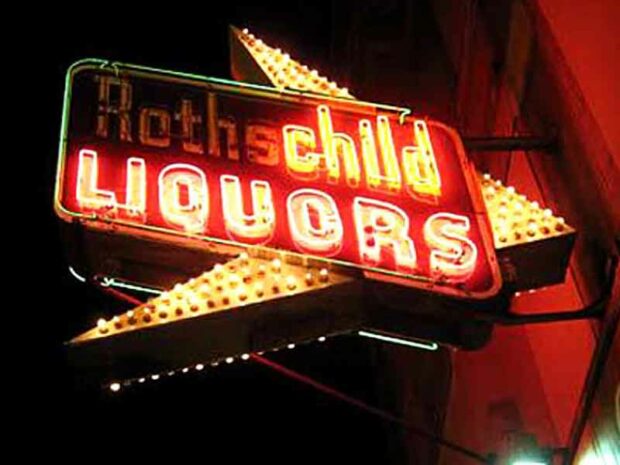 In case you were wondering what Hell on Earth looks like, look no further than this Shell gas station. The good news is nobody is there. Maybe everyone is in Heaven? 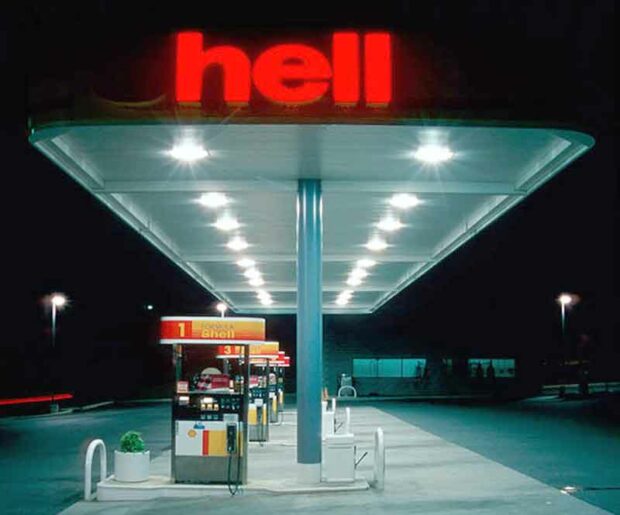 Oops, it looks like half of the neon sign at Babcock Frozen Yogurt burned out. Unfortunately it was the wrong half. The end result is a restaurant that sells “Cock Yogurt”, which by the way, sounds like a serious medical problem. 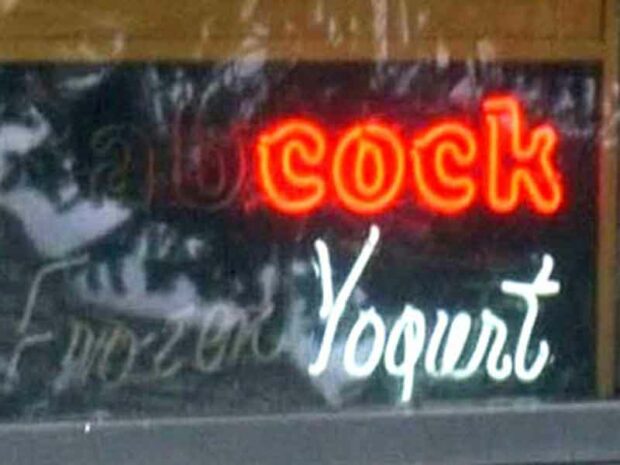 What sounds like more fun, a Shoe Carnival or a Hoe Carnival? 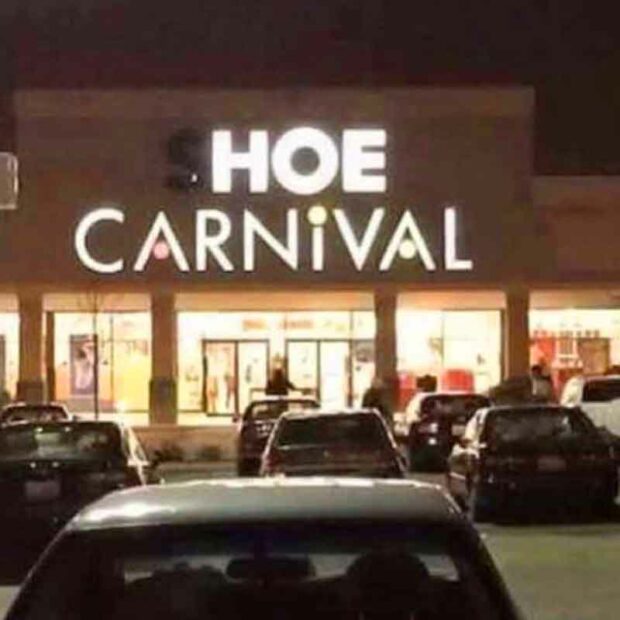 This “Land Ho” sign would make a lot of sense if the Maryland Hotel was a floating boat hotel. 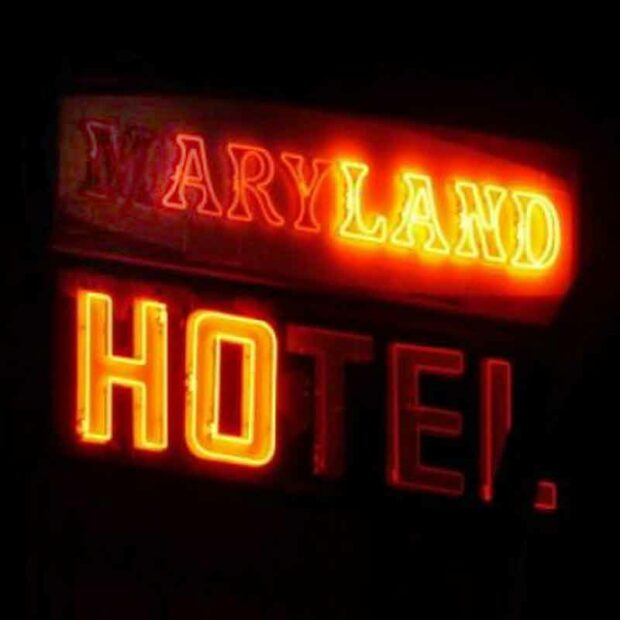 What are the odds that every letter in this sign burned out except “Tits”?Who knows, maybe at night this Salvation Army Thrift Store transforms into a strip club? 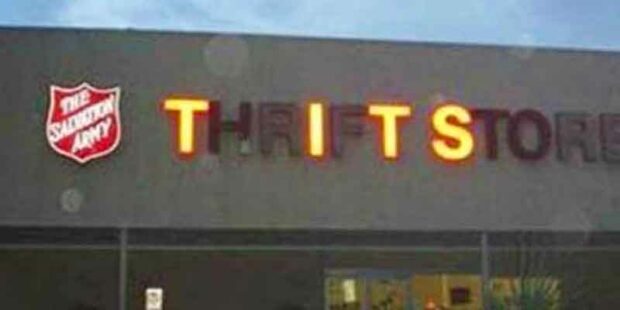 Hotel Cass became “Hot Ass” after the E, L and C burned out. 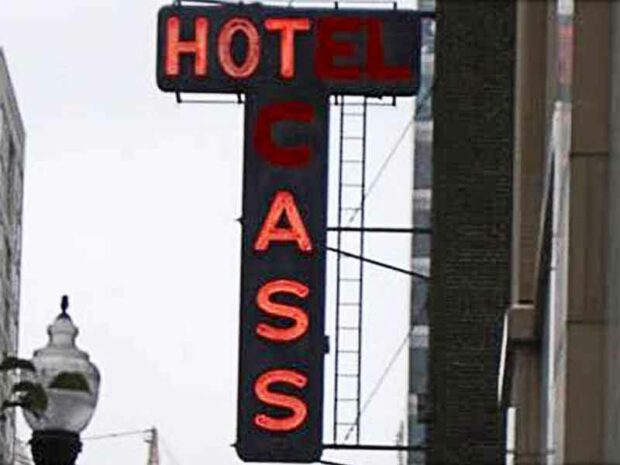 Apparently the Jewelry Factory needs to replace the E, L, R and Y in their sign. In the meantime, it would be interesting to see if anyone came into the store looking for something besides jewelry. 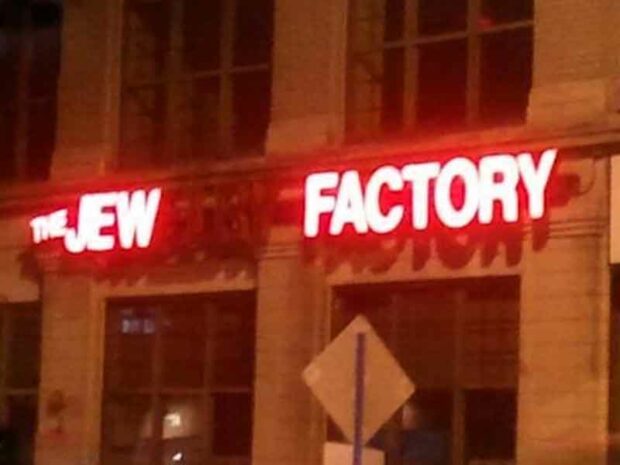 A prankster removed the C at this McDonald’s changing station making it the “Baby Hanging Station”. 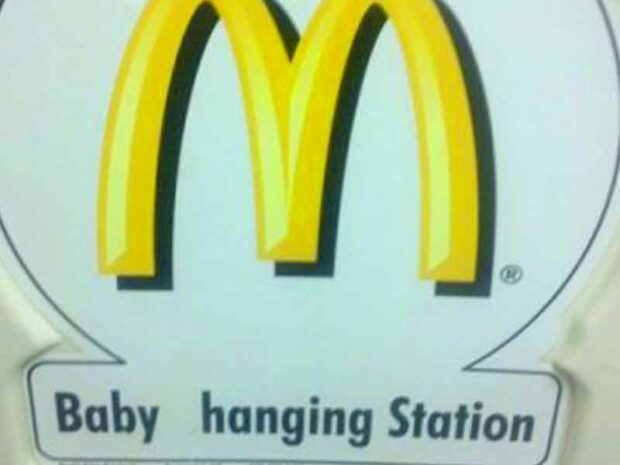 Have you been to the new store that just sells ears? It’s in the same spot as the old Sears store. 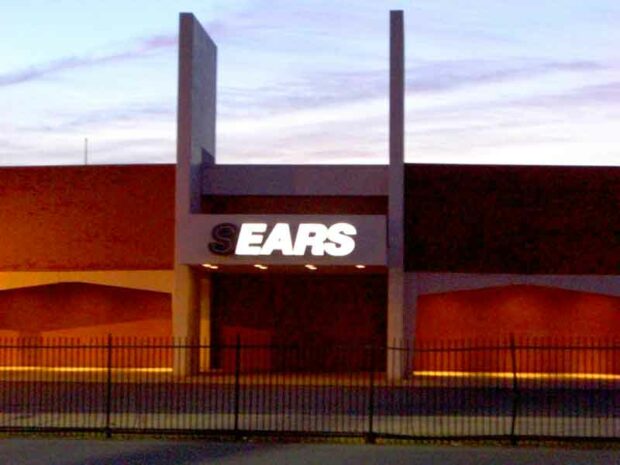 Both the S and the apostrophe burned out in this sign for Slick Willie’s bar. Without those two characters, it’s now “Lick Willies”. 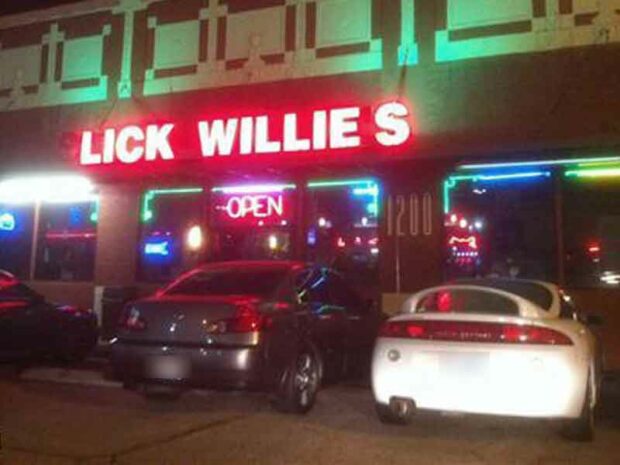 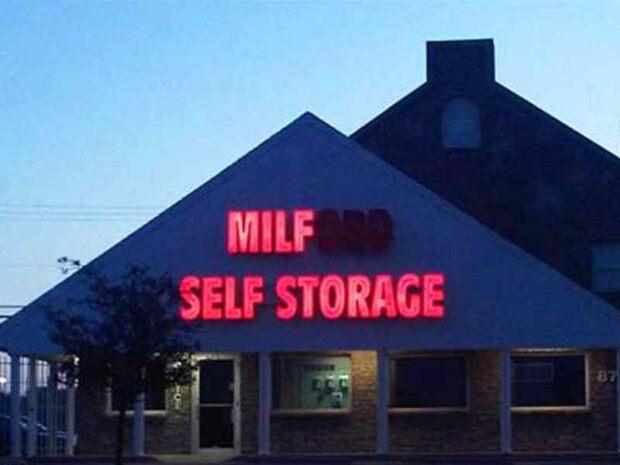 Sometimes people have shorter nicknames for their favorite stores. For example, instead of Kentucky Fried Chicken, people say KFC, or Burger King is BK. But does anyone ever call The Home Depot just The Ho? 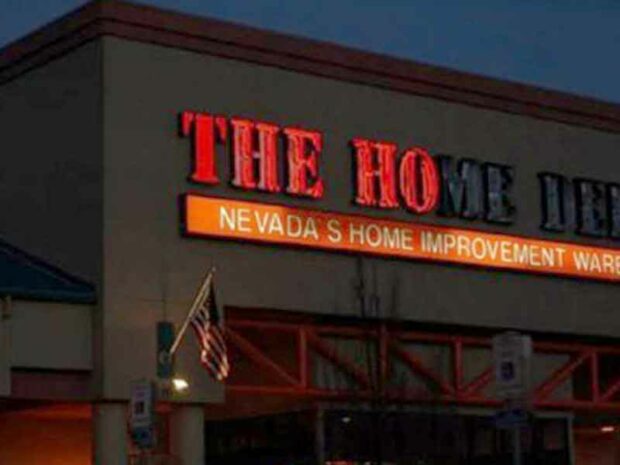 We guess this hotel has a letter theft problem. They didn’t even have enough letters to properly ask for help. 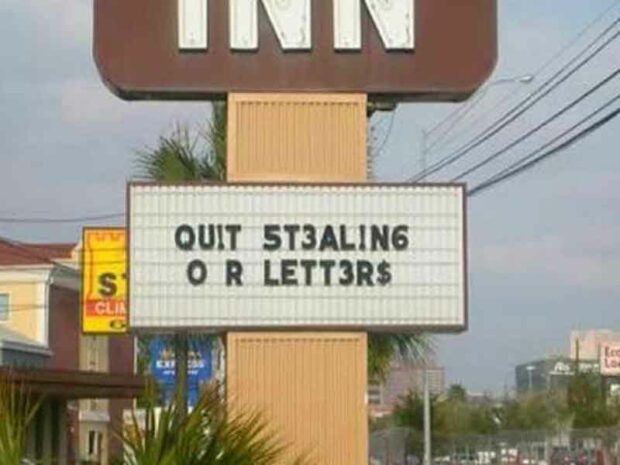 The sports restaurant chain Hooters is known for their attractive female waitresses. Although I have several friends who have dated Hooters staff, this unfortunate sign fail implies that anyone can take these ladies “to go”. 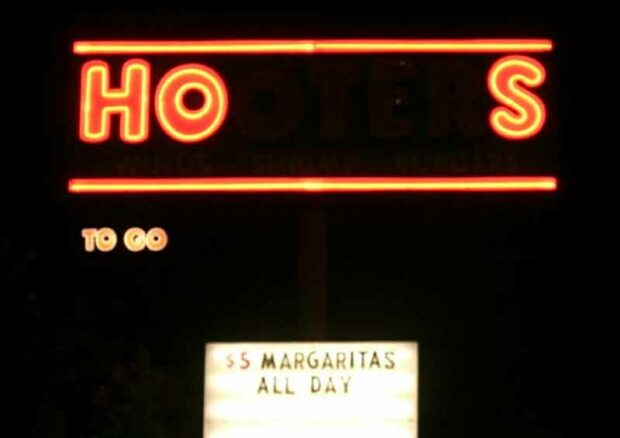 Here’s a very deep question to ponder, are feet shoes? 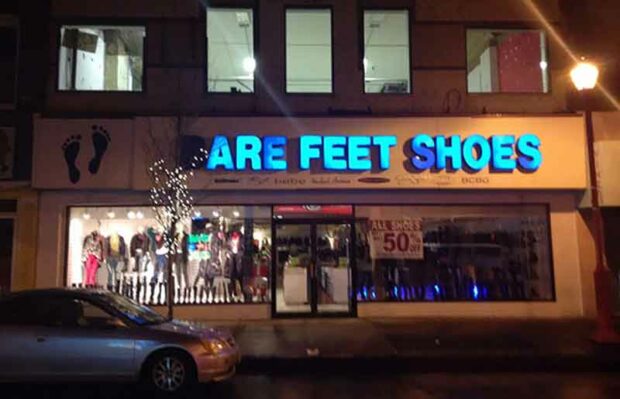 Remember, if you need to really take your time on the toilet, then take advantage of Walgreen’s “1 hour poo” locations. 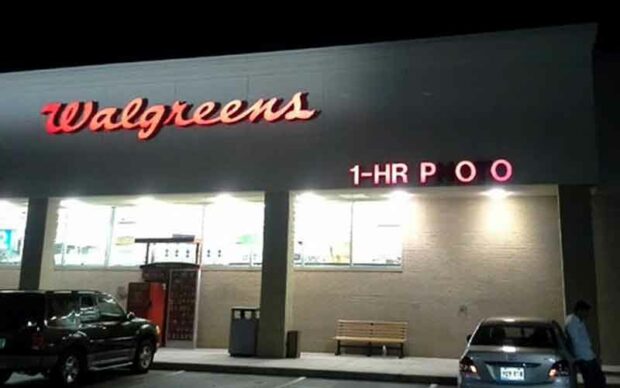 This Hillsdale sign burning out to just the letters LSD is funny enough. But when you pair LSD with their community tagline of “The Beginning Of Something Wonderful”, transforms this funny sign fail into an advertisement for drugs. 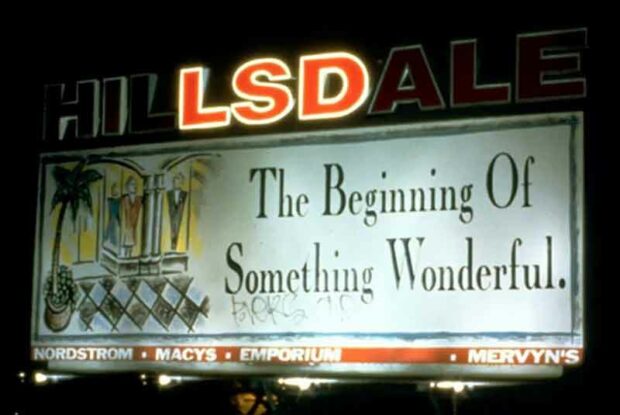 We hope you enjoyed these funny sign fails. If you see a sign missing letters that resulted in an unexpected message, then please take a picture and sent it to us.