Most people take advantage of the free McDonald's WiFi perk by using their laptop or smartphone. But for some people, like this woman, portability isn't everything.

Attracting customers with free remote working spaces can be big business for coffee shops and quick-service restaurants. Many establishments like Starbucks and Whole Foods cater to this audience because people who spend a few hours at a location will often order several menu items throughout the day. Even fast-food restaurants like McDonald’s now offer free WiFi and power outlets. Most people take advantage of the free McDonald’s WiFi perk by using their laptop or smartphone. But for some people, like this woman, portability isn’t everything. 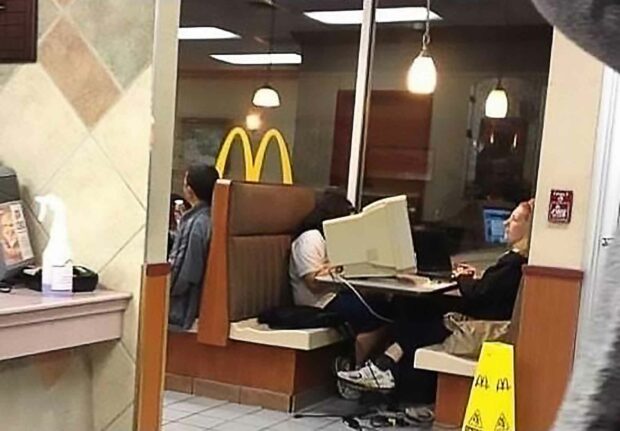 It’s usually good etiquette to only use one power outlet when in airport lounges, coffee shops and other locations that provide free remote working spaces. But a full desktop computer with monitor will need at least two ports. But good news, it looks like she brought a plug strip with her.

Does This Old Desktop Computer Even Support WiFi?

Does McDonald’s have WiFi? Yes, McDonald’s started offering free WiFi to customers in 2010. But even if she’s there for the free WiFi, we’re not sure that her old desktop computer can support it. Maybe this McDonald’s location has an extra phone port that she can use for her dial-up Internet connection.

We’re not sure when this photo was taken but we have a few theories that might help explain it.

How To Open WebP Files And Convert WebP To JPG (Mac & PC)
Next Post:Incredible Version Of Radioactive By Imagine Dragons On Howard Stern