How To Hack The Pepsi iTunes Free Song Giveaway (2005)

Pepsi and Apple are giving away 100 million song codes under bottle caps. Here's how to hack the Pepsi iTunes promotion and get a free song every time.

The “Cola Wars” opened a new digital front during the 2004 Superbowl. Apple and Pepsi joined up to give away millions of dollars worth of free music from the iTunes Music Store. In fact, the first Pepsi iTunes promotion was so successful that they are doing it again.

Starting February 2005, 1 in 3 bottles of Pepsi will give you a special free song code to redeem at the iTunes Store. To increase your odds of winning, all you have to do is buy a bottle of Pepsi and look under the cap. Here are some pointers to help you master the “cap peeking” technique.

Looking under the cap really isn’t that hard. But there’s a little trick to it. A little bit of patience will pay off. During the first promotion, I had a 100% winning record and drank Pepsi every day at lunch for months. My desk was covered in yellow caps.

01) Look For The Yellow Caps 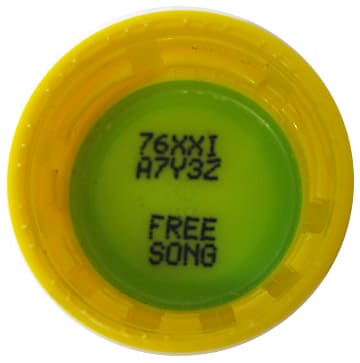 In addition to the yellow cap, also look for an Apple Computer logo on the label with some text explaining the iTunes promotion. 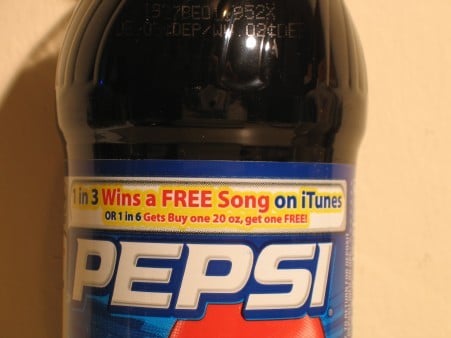 02) Pick From Tha Back Of The Refrigerator

When you go to the store, grab the Pepsi bottles from the back of the refrigerator. A lot of people know about this “look under the cap” trick and 9 out of 10 times the bottles up front all losers.

Place your nose to the bottom of the label on the Pepsi bottle. Slowly tilt the bottle back until you can see under the cap. It takes about 5-30 seconds to get the angle right. 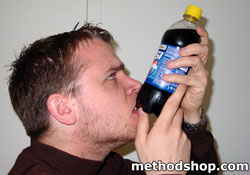 Tilt and rotate the bottle while carefully while looking under the cap. You are looking for either “SORRY TRY AGAIN” or “XXXXX XXXXX FREE SONG” (the X’s are the 10 digits winning code). The words “Again” and “Song” are pretty easy to spot. 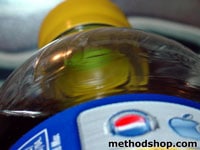 Condensation is your enemy! Hold your breath while looking under the cap or you might fog up the bottle making it hard to see. Also if the humidity is high, the outside of your Pepsi bottle might steam up. Wipe away the condensation and quickly peak again.

Also, try to buy your Pepsi iTunes bottles from small Mom and Pop stores. They usually don’t mind if you dig through their refrigerators and might even curious and ask you to teach them the trick. Bigger chains might send over the manager and kick you out. It happened to me at 7-11.

Buy your winning bottle, drink the soda and redeem your code. Once you have the winning cap in your hands, sit down in front of a computer with iTunes installed and an internet connection. On the front page is a Pepsi logo that says redeem song. Click on this and type in your code. You should now have a song credit listed in your iTunes account bar with any other money you have linked to your account.

Find those winning bottles while they last. The Pepsi iTunes promotion officially ends April 11, 2005. Winners can only claim up to 10 songs per day and 200 total songs per iTunes account. Once the codes were entered into the iTunes Music Store, users then have until May 23, 2005, to use their free songs. After that, your codes won’t work.