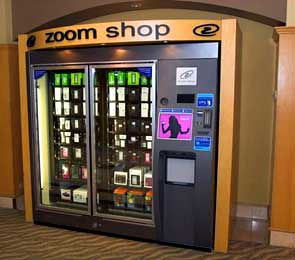 Are pushy salespeople preventing you from getting an iPod? Still scared of using your credit card online. Don’t feel like paying inflated shipping costs? The list of excuses for not owning an iPod is slowing coming to an end. Chances are an iPod vending machine is coming to a location near you.

These vending machines aren’t absolutely everywhere yet, but apparently they are pretty popular and more and more of them pop up every month. I ran a quick search on flickr and found photos of iPod vending machines in the following locations:

These locations seem to target travelers as well as take security into mind. Airports and hotels usually have 24-hour security and lots of people around. Someone trying to tip over the vending machine and pull a “smash and grab” would have a tough time not getting caught.

But how practical are these iPod vending machines? An iPod is probably not a good “impulse” purchase. If you were to buy an iPod right before getting on a plane, how would you fill it with music and videos? You would need a laptop computer and WiFi Internet access to the iTunes Music Store. Loading an iPod via an airport WiFi network isn’t necessarily a quick process, so hopefully you have a long layover between flights.

Regardless of the practicality, this seems to be a growing trend and it’s probably just a matter of time before iPods become as common in vending machines as gum? Hell, the Japanese even sell iPods in 7-Eleven.

So how many quarters would you need to buy an iPod Video anyway?

Useless fact of the day: The first iPod vending machine was built by Zoom Systems and was located in Atlanta’s Hartsfield-Jackson International Airport.