Nicknamed "The Donk," the JL421 Badonkadonk Land Cruiser Tank made its debut in 2002 at the Burning Man festival in Nevada and has since made numerous appearances as a support vehicle for the Stanford University Marching Band.

Every once in a while you’ll find something really random or weird on Amazon (like a Mongolian Goat Hide Pillow!?). But a $20,000 “personal land cruiser” named “The Donk” might be the coolest thing currently listed on Amazon.

The JL421 Badonkadonk Land Cruiser (ba-donk-a-donk) is a custom tank that looks like it was modeled after Jabba the Hut’s Sail Barge from Star Wars: Return of the Jedi. Nicknamed “The Donk,” the JL421 Badonkadonk Land Cruiser Tank made its debut in 2002 at the Burning Man festival in Nevada and has since made numerous appearances as a support vehicle for the Stanford University Marching Band.

Unfortunately, NAO Design, the makers of the Donk, couldn’t send us a Donk to test drive. But they did send us some exclusive photos and answered all of our questions. 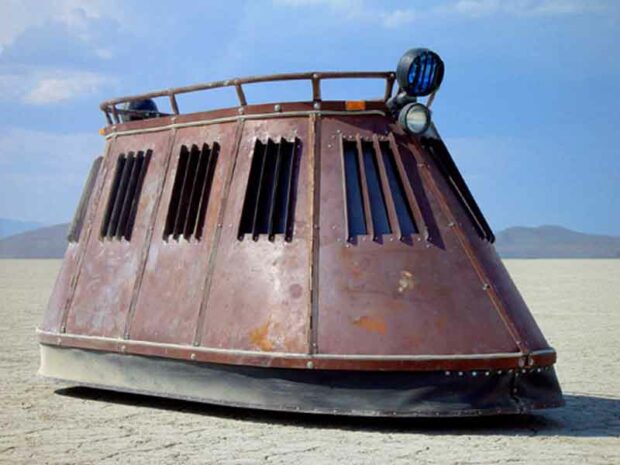 The exterior of the Donk is a steel shell with a rust patina. It’s very desert looking, to say the least. But the Donk isn’t just all looks, remember this is a steel “tank,” so there are lots of protective armor-like features.

The Donk features the following armor:

When you first look at it, you might mistake the Donk for a hovercraft, but in fact it runs on four wheels, concealed by a unique industrial-strength rubberized flexible skirt that shields and protects the wheels to within an inch of the ground, while still allowing for enough flex to give clearance over bumpy and uneven terrain. 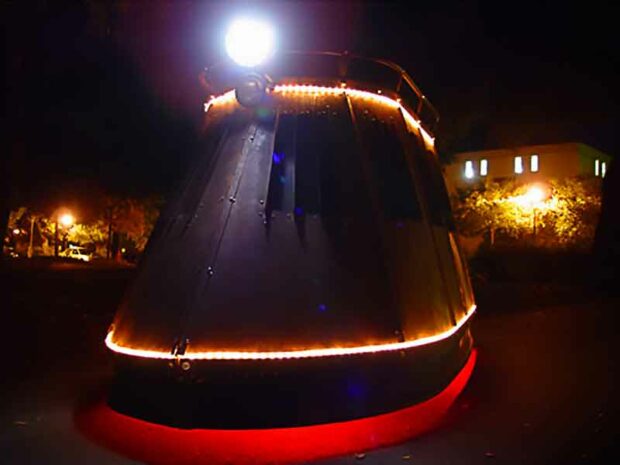 Don’t forget to bring your iPod while you’re cruising around in the Donk. Inside the Donk is a 400-watt premium sound system with a PA system that allows you to blast sound outside the vehicle.

And if you wouldn’t be noticed enough just by driving around in a mini tank blasting music on a PA system, the Donk features lots of exterior lighting. We’re talking head and tail lights, turn signal lights, trim lighting, and underbody lighting (did they have ground effects on Tatooine?).

As you might imagine, the Donk transforms into party-mode at night. With a designated driver at the helm, the lights and music set the scene as the Donk glides around looking for trouble or fun. Its mere presence has the ability to draw a crowd and keep them interested. On more than one occasion, the Donk has reportedly rolled up to waning local parties and “stolen” the party and relocated it to the JL421.

And while the Donk may look all tough and rugged on the outside, it features a custom made plush carpeted and upholstered interior complete with mood lighting. I’d describe it as cozy.

The Donk can hold a crew of 5 people internally and another 5 on the roof (or 20 Jawas). It can also be driven from within the armored shell or from an exposed standing position through the hatch. 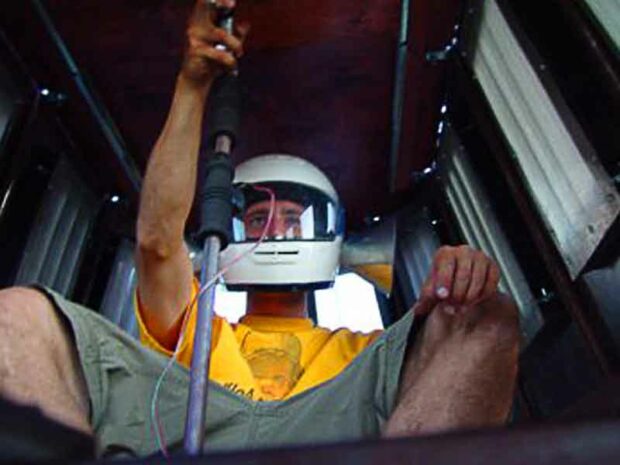 A special control stick that pivots up and down allows the driver to pilot the Donk from either a standing or seated position. And while you are hunkered down inside the Donk, you can use the external camera to drive or to keep tabs on what’s happening outside.

Under The Hood Of The Badonkadonk

The Donk is powered by an air-cooled, 6HP Tecumseh gasoline (unleaded only) engine, with a centrifugal clutch, giving the Donk a top speed of 40 mph. Master power, ignition, lighting, and stereo features are controlled from a single switchboard to the left of the driver, accessible from either the seated or standing driving position.

Where Can You Drive The Donk? 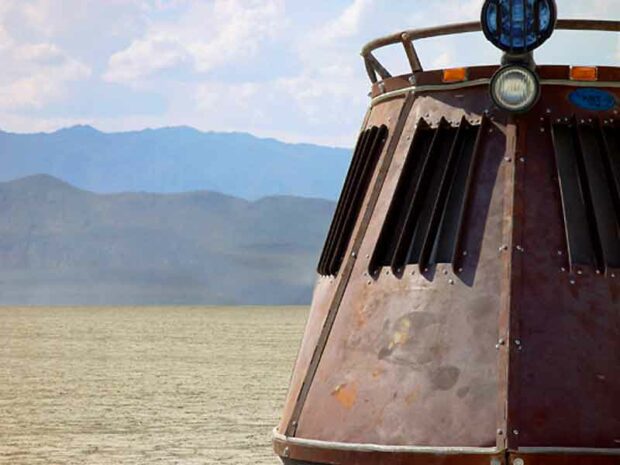 Before you get all excited to drive your new mini tank around town, you should know that the Donk is not licensed for use on public roads. It’s intended as a recreational vehicle only. So make sure you own a large piece of property or invest in a time-share on planet Tatooine. I’m pretty sure Uncle Owen and Aunt Beru don’t need their place anymore.

The Donk? What Is With The Name?

Besides being a “personal tank,” the weirdest thing about the JL421 Badonkadonk Land Cruiser is its name. According to Wikipedia and Spoonie Luv from the Comedy Central show Crank Yankers, a “Badonkadonk” is a butt. 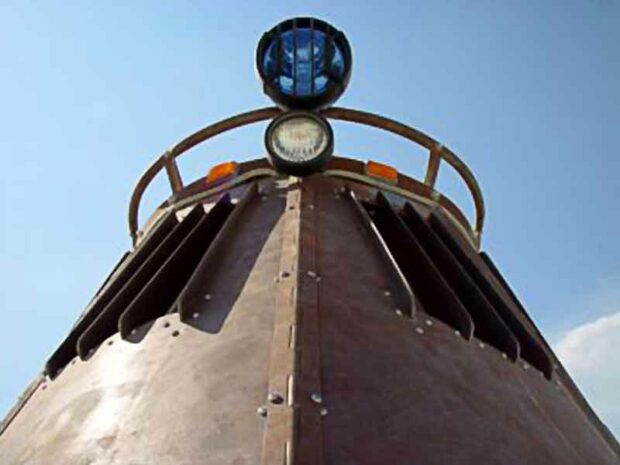 With the 6HP Tecumseh engine revved and the 400 watt sound system thumping, the Donk will often leave people wondering what the hell they just saw. Sure the Donk sounds pretty cool, but it costs as much as a car – $20,000 to be exact. At $20,000 each (shipping not included), Spoonie Luv would call the JL421 Badonkadonk Land Cruiser one expensive piece of “ass.” But if you have thousands of dollars to throw around, a personal land cruiser would make a really nice Father’s Day or Christmas present. All I need to do now is spawn some rich children to buy me one. 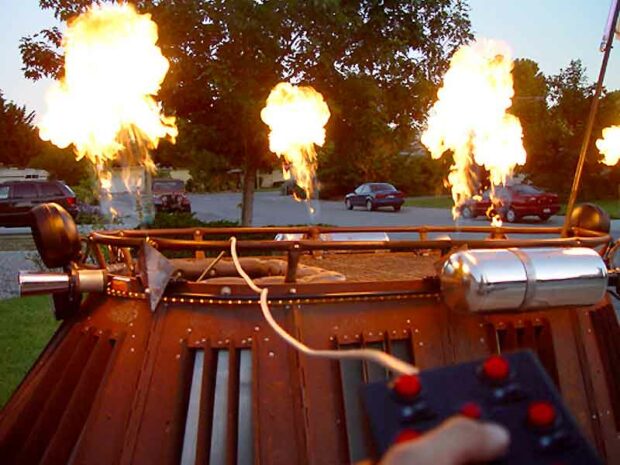 Badonkadonks are produced on an order-by-order basis, with each one having its own unique set of features (flamethrowers and fire effects are actually an option). NAO Design, the company that makes the Donk, also makes a relaxation chamber with a heated water mattress. I’m pretty sure Michael Jackson owns one.