When a LEGO creation makes the front page of Digg.com, it’s usually because of the project’s massive size. For example, the giant LEGO tower built in the UK this past summer or the release of the biggest and most expensive LEGO set of all time, the 24 pound Star Wars Millennium Falcon ($500). But this time, it’s the LEGO creativity, not the scale, that’s getting all the attention.

The Toy Zone blog has assembled pictures of 20 famous movie scene recreations using LEGOs. Normally, any sort of top 10/20/50 list is loathed on Digg.com, but who can resist a headline like “20 Classic Films Recreated in LEGO”? 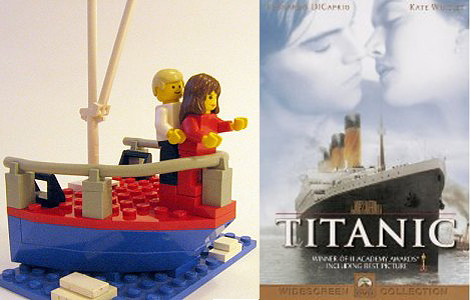 In addition to the Titanic, LEGO recreations were made for such movie classics as Creep Show, Iron Giant, Casablanca and The Matrix. You can see all 20 LEGO movie recreations at TheToyZone.com.

I wonder if Nathan Sawaya was behind any of this.

13 Funny Halloween Pumpkin Carvings (That Will Make You Laugh)
Next Post: Purple ‘super tomato’ that can fight against cancer »