As a way to help remember her, we pulled together some of the most memorable Whitney Houston quotes in chronological order. It's interesting to see how her life, priorities, and feelings changed through the years.

In 2012 the world lost pop music legend Whitney Houston. News of the 48 years old’s death sent shockwaves across the globe. The American vocalist, songwriter, actress, producer, and model was one of the world’s best-selling music artists with over 200 million records worldwide. In 2009, Guinness World Records cited her as the most awarded female act of all time.

Houston accidentally drowned on February 11, 2012, while taking a bath in her Beverly Hilton Hotel room. Toxicology reports showed that she had been using cocaine. It was a tragic end to such a beloved diva in American culture.

“I decided long ago never to walk in anyone’s shadow; if I fail, or if I succeed at least I did as I believe.” – Whitney Houston

Via “Greatest Love of All“

This quote is actually a lyric from Houston’s hit song “Greatest Love of All” from her 1985 self-titled debut album.

“In grammar school, some of the girls had problems with me. My face was too light. My hair was too long. It was the black-consciousness period, and I felt really bad. I finally faced the fact that it isn’t a crime not having friends. Being alone means you have fewer problems. When I decided to be a singer, my mother warned me I’d be alone a lot. Basically, we all are. Loneliness comes with life.”

“When I decided to be a singer, my mother warned me I’d be alone a lot. Basically, we all are. Loneliness comes with life.” – Whitney Houston Quotes Through The Years (1987)
Click To Tweet

“Cracking gum or sitting with your legs open were considered unacceptable … and I’d better not come back from the yard with scratched knees.”

“I was scared to death… I was aware of people staring at me. No one moved. They seemed almost in a trance. I just stared at the clock in the center of the church. When I finished, everyone clapped and started crying. From then on, I knew God had blessed me.”

“From the beginning, the camera and I were great friends. I know the eye of the camera is on me — eye to eye. It loves me, and I love it.”

“Critics would say that Clive told me what to do and how to do it because that’s all bulls**t. I don’t like it when they see me as this little person who doesn’t know what to do with herself — like I have no idea what I want like I’m just a puppet and Clive’s got the strings. That’s bullsh*t. That’s demeaning to me, because that ain’t how it is, and it never was. And never will be. I wouldn’t be with anybody who didn’t respect my opinion. Nobody makes me do anything I don’t want to do… Clive and I work well together… We get on each other’s nerves sometimes, but we’ve been together 10 years now. Anybody can get on anybody’s nerves over that long a time.”

Her Relationship With Her Mother (1993)

“You learn, you grow up, and you become your own woman. But we’re still very close. When other people are talking sh*t to my ear, I know my mother won’t blow smoke up my a**, and I know she’ll tell me the truth. She’s honest with me.”

“I know my mother won’t blow smoke up my a**, and I know she’ll tell me the truth. She’s honest with me.” – Whitney Houston Quotes Through The Years (1993)
Click To Tweet

“I am so tired of this. I’m really sick of it… You mean to tell me that if I have a woman friend, I have to have a lesbian relationship with her? That’s bullsh*t. There are so many, many female artists who have women as their confidantes, and nobody questions that. So I realize that it’s like, ‘Whitney Houston — she’s popular, let’s f**k with her.’ I have denied it over and over again, and nobody’s accepted it. Or the media hasn’t.”

Her Childhood Dreams Of Being A Teacher Or A Veterinarian (1993)

“I don’t think that my husband womanized anybody, because I know that if he wanted them, they definitely wanted him, you know. I don’t think, you know, it was about womanizing… boys will be boys, and they have their fun and they play. When they really become smart and they find a good woman, they marry her. And that’s what he did.”

“I had a miscarriage during the filming of ‘The Bodyguard.’ It was very painful, emotionally and physically… I was back on the set the next day. And it’s over. But I had Bobbi Kristina one year later, and I am blessed.”

Criticism of Marriage to Bobby Brown (1996)

“I’m like an American princess. White America wanted me to marry someone white. They don’t understand why I’d want a strong black man.”

“White America wanted me to marry someone white. They don’t understand why I’d want a strong black man.” – Whitney Houston Quotes Through The Years (1996)
Click To Tweet

“They’re devils to me … and they’re out to eat my flesh.”

“My business is sex, drugs, rock ‘n’ roll. You know? I mean, my friends, we have a good time. But as you get older, you get wiser. You know? You stop a lot of the kid stuff. I had no time to grow up, had no time to party. I didn’t even date in my, date in my 20s. It was rough… I think I kind of reverted back as I got older. And I said, ‘Well, I’m just gonna party, you know?’ It was kind of a rebel in me, you know?”

“Nobody makes me do anything I don’t want to do. It’s my decision. So the biggest devil is me. I’m either my best friend or my worst enemy. And that’s how I have to deal with it.”

“The biggest devil is me. I’m either my best friend or my worst enemy. And that’s how I have to deal with it.” – Whitney Houston Quotes Through The Years (2002)
Click To Tweet

“Crack is cheap. I make too much money to ever smoke crack. Let’s get that straight. OK? We don’t do crack. We don’t do that. Crack is whack.”

Drug Use During Her Marriage to Bobby Brown (2009)

“There were sometimes we’d laugh our tails off. We had a ball. Sometimes you do have a good time. But when it gets to the point where you’re sitting in your home and you’re just trying to cover what you don’t want people to know. It’s painful. And then you want more just so that you don’t let anybody see you cry. Or anybody to see we’re not happy.”

“I have so many good memories of spending time with him. I’ve known his family for so many years. For at least 20. I thought: ‘This can’t be true. This can’t be true.’ I knew he was on painkillers at one time. I didn’t know how far and how deep it was. I just remember doing the anniversary special, the 30th anniversary, and I remember looking at Michael Jackson … and then looking at myself going: ‘No, I don’t want this to be like this. This can’t happen. Not both of us.'”

Running Away With Her Daughter (2009)

Houston said she considered, “growing organic fruit with my daughter on a little island on the beach and everything, living the simple life. You have to understand, I have been all around the world … and I’d done it all at that point in time, or I thought. However, I wasn’t remembering the gift that God had given me. I had totally put all that aside. And my daughter was growing up before my eyes, and I just wanted to grab hold of that.”

Bobby Brown’s Infidelity & The End of Her Marriage (2009)

“I just knew. I was like, ‘You don’t smell right. You don’t look right. Something’s going on.’ And then all this other stuff started coming out about him being with this one or that one or being too promiscuous. Dragging dirt into my home… We had a big, big giant portrait of me and him and my child. He cut my head off the picture. Stuff like that. And I thought, ‘This is really strange.’ So I figured, cutting my head off a picture, that was a little much for me.” 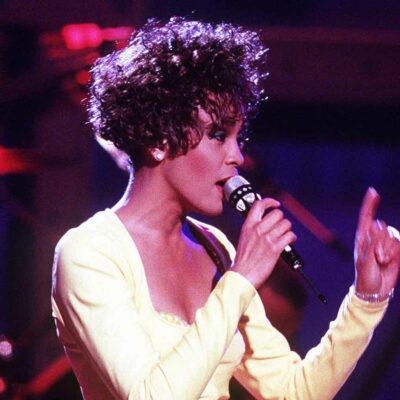 Whitney Houston’s attitudes and advice have motivated countless women around the world. Here are some of the most inspirational Whitney Houston quotes.

Whitney Houston Quotes Through The Years

Even though Whitney was one of the biggest artists of all time, she always candid in the interviews she gave throughout her life. She revealed everything from her ambitions to her demons. Although Whitney is no longer with us, her music is and she will always be immortal. What are your thoughts on Whitney? What did you think about our list of Whitney Houston quotes? Have you read our article about Whitney Houston’s most inspirational quotes yet? Please post a comment below.

NERD NOTE: Whitney Houston has several famous family members. Houston is the cousin of Dionne Warwick and Dee Dee Warwick. Her godmother was singer Darlene Love, lead singer of the 1960 girl group The Blossoms. And the early 1970s, Houston met Aretha Franklin in a recording studio when she was only about 9 or 10 years old. The relationship grew between their families and Franklin eventually became Houston’s honorary aunt.

How To Make Dry Ice At Home
Next Post:How To Use Your iPad Mini As A Phone – Tutorial