America to Moon: We Surrender! 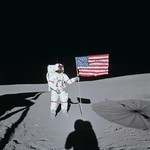 Sorry America. You might have been the first country to “conquer” the moon, but it looks like the stars and stripes planted during the moon landing have surrendered… to sunlight.

NASA recently provided images from their LRO (Lunar Reconnaissance Orbiter) showing that most of the American flags placed on the moon by the Apollo astronauts are still standing. However, it appears that all of those flags have faded to white. According to an article on The Smithsonian’s Air & Space blog, decades of UV radiation, unfiltered sunlight, micrometeorites and the Moon’s harsh temperature fluctuations, which include 14 day cycles of 100° C (242 F) heat and cold -150° C (-280 F) darkness, have caused the flags to fade to white and fall apart.

Unless the Americans get back up to the Moon soon with new flags, Dennis Lacarruba from Annin, the flag company in New Jersey that sold the American moon flags to NASA in 1969 for $5.50 each, says that the sun-bleached flags will eventually completely disintegrate.