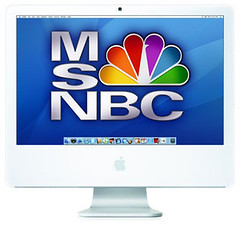 I guess the Internet video battle between QuickTime, RealPlayer and Windows Media is over. Who won… none of the above. Sites like MySpace and YouTube have made Flash the standard flavor of video on the Internet. Even Microsoft has thrown in the towel. Their news website, MSNBC.com switched over to Flash in October.

It was probably a painful decision for Redmond to admit defeat, but they were losing eyeballs and ad revenue on a daily basis. If you wanted to watch video on MSNBC.com’s site, you had to be using Internet Explorer on a PC. But as the Macintosh user base grew (thanks to the iPod) and more and more people started using the Firefox web browser, Microsoft saw their audience start to shrink. Microsoft had to finally face the fact that they needed a cross-platform video player that worked with other web browsers.

Charlie Tillinghast, president and publisher of MSNBC.com, had this to say in a company email “We have been pushing for a player that works on Mac and Firefox for a long time and are eager to see it launch… Some people assume that Microsoft, and by extension MSNBC, are anti-Mac, but it should be noted that Microsoft makes an outstanding version of Office for the Mac, including the Entourage email system. I purchased a new iMac in anticipation of this release and we have several in use at MSNBC itself.”

Is it me or did hell just freeze over at Redmond?