Paris Hilton is the great-granddaughter of Conrad Hilton, the founder of the Hilton Hotels empire. Lacey Underall is a fictional character played by actress Cindy Morgan in the movie Caddyshack. They both have a lot in common but who can party harder? Was Lacey Underall, the original inspiration for Paris Hilton? Put on an anti-viral panty liner and let the battle between the spoiled rich blonde girls begin!

Originally released on July 25th, 1980, Caddyshack remains one of the most entertaining and brilliantly written/improvised movies of all time. Featuring such comic geniuses as Rodney Dangerfield, Chevy Chase, Bill Murray, and Ted Knight, who would have thought that one of its main characters, Lacey Underall (Cindy Morgan), would foreshadow one of the most iconic pop-culture figures of all time, Paris Hilton.

Most celebrities are famous because they have some special talent, like their athletic or musical abilities, creativity, scientific knowledge, or acting skills. But Paris Hilton remains one of the most famous/infamous persons on the planet without a “talent” besides being rich and pretty. And just like Lacey Underall from Caddyshack, she’s popular mainly because she’s an attractive big city girl with family money who is willing to “date” almost anyone.

Here’s a serious question: Why is Paris Hilton famous? She can’t act, she can’t sing, and according to the grammatical errors on her custom-made t-shirts, she’s as dumb as a rock. But in the world of pop-culture where rumor and speculation abound, she remains the queen of talentless celebutants.

The tabloids can’t get enough. Did Paris Hilton get a boob job? Is she pregnant? Who is she dating this week? Does she have herpes? She does?! How did she get herpes?

The real question is: Who gives a damn about all these fake celebrities and “celebutants” like Paris Hilton anyway? Apparently, a whole hell of a lot of people. Just try searching Google for phrases like “paris hilton sex tape” or “paris hilton movie” and you will get millions of results.

Okay, so this desire to chat about celebrities like Paris Hilton explains the birth of MySpace, Gawker, MSN Spaces, and the hundreds of pop-culture web sites and gossip blogs. When blogger Perez Hilton was just getting started, he was able to generate enough blog ad revenue talking about Paris Hilton and her male counterpart, Tucker Max, that he quit his day job.

In the movie Caddyshack, Judge Smails is worried about Lacey’s loose behavior after she bangs golf caddy, Danny Noonan, at the Smails’ residence. He tries to keep a lid on it by offering Danny the caddy scholarship.

Jump forward several decades and things come full circle as Paris’ parents jump in trying to keep her sex tape with Rick Solomon off the market. You can’t really blame them. Who would want to have a video circulating of your underage daughter drinking champagne in a hotel room and then getting “serviced” by Solomon in several different positions?

Again Lacey pursues and eventually hits the skins with Ty Web (Chevy Chase), the independently wealthy golf-bum with an unorthodox approach. In one of my favorite Caddyshack quotes, Chevy Chase famously repeats a line from the Zen philosopher Basha, “…a flute with no holes is not a flute, and a doughnut with no holes is a Danish.” Whatever that means. And as a wealthy playboy, he of course has his shot at Lacey. 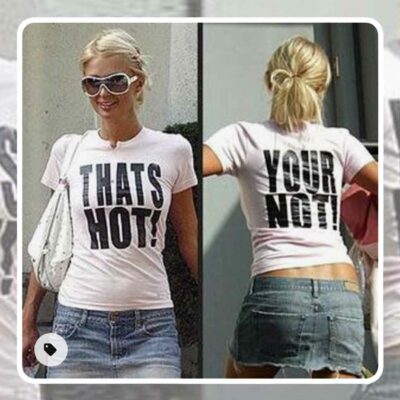 There are so many Paris Hilton dumb moments, but according to her new custom-made t-shirts, she doesn’t know the difference between “your” and “you’re.”

Read moreAdd Another Incident To The List Of Paris Hilton Dumb Moments: The Your vs You’re T-Shirt

When Ty and Lacey meet for the first time in Caddyshack, Lacey says she likes skinny skiing (aka skiing naked) and going to bullfights on acid.

We all know Paris likes to travel, but she certainly doesn’t need to go skiing to get naked. She reportedly prefers doing lines of cocaine in the ladies room with Lindsay Lohan and Nicole Richie as opposed to waiting for the LSD to kick-in at a place where you can’t order vodka and Red Bull bottle service.

Again, jumping forward several decades, we know Paris has been going back and forth between billionaire playboys, the greek geeks, Paris Latsis and Stavros Niarchos. Has she only been flip-flopping because of her herpes? Given her promiscuity, there’s no way to know where she got it or who she has given it to. Makes you think twice before wanting to spend a night in Paris.

So let’s take a trip back to 1980 and reconstruct the events leading up to the creation of Paris Hilton. Rick and Kathy Hilton were out in the Hamptons one night in May (Paris was born in February 1981) partying hard and had trouble with the Trojan, so they decided to skip it.

A couple of months later, the newly pregnant couple might have seen the newly released film Caddyshack and thought to themselves, I hope our daughter doesn’t grow up to be like Lacey Underall.

Unbeknownst to them at the time, this child would not only be just like Lacey Underall, but take things to the next level. Both Lacey and Paris are family embarrassments, but at least Lacey was never featured on the website Hollywood Tuna or the star of an X-rated sex tape.

How To Download 1000 Free MP3s From SXSW Music (2006)
Next Post:Watch Humanity Get Destroyed In The Scary Movie 4 iPod Scene