You are here: Home / News / Add Another Incident To The List Of Paris Hilton Dumb Moments: The Your vs You’re T-Shirt

There are so many Paris Hilton dumb moments, but according to her new custom-made t-shirts, she doesn't know the difference between "your" and "you're."

Is Paris Hilton smart and just pretending to be dumb? Does she have us all fooled? After this latest incident, we can all probably assume she won’t be joining the ranks of MENSA anytime soon. According to Paris Hilton’s new custom-made t-shirts, she doesn’t know the difference between “your” and “you’re.” The front of the shirt says “That’s Hot,” but the back says “Your Not” instead of You’re Not.

Come on Paris, please stop making it so easy for the world to confirm what we already all suspected, you’re an idiot! You’re now wearing your stupidity on a t-shirt.

Look, at the ripe old age of 25, if you still don’t know the difference between your and you’re, it’s time to retire from the grind that is your empty life. Maybe you should stop partying around the globe on your Grandfather’s private Hilton Hotels jet for a few years and go back to grade school.

Why Is Paris Hilton Famous? Can’t Someone Else Do The Same ‘Paris Hilton Dumb And Famous Act’ Better Than Her?

Don’t you need some kind of skill, talent, or impact on the world to be famous? Paris Hilton can’t act, can’t sing, is rumored to have herpes (according to the NY Post), and based on this t-shirt picture, needs to get hooked on phonics, instead of hooked on partying. But despite her lack of talent, she remains the queen of gossip… for now.

It won’t be long until someone smarter can pull off the same Paris Hilton dumb and famous act but better. All you need to succeed is a famous relative, a sex tape, and the desire to share every aspect of your life on the Internet.

Who Can We Blame For Paris Hilton?

I finally decided to ask the question. Whose fault is it that this talentless nobody remains on the cover of magazines, in the news, and on TV? It’s simple, since 1980 the world has been infatuated with a young blonde woman from Manhattan with perky breasts and loose morals. That’s right, I’m talking about Lacey Underall, the spoiled rich girl from the movie Caddyshack. 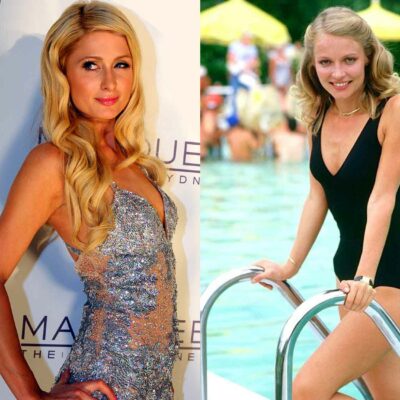 Read moreParis Hilton vs Lacey Underall: Who Can Party Harder?

Not a believer? Still not convinced? Here’s an in-depth comparison between Paris Hilton and Lacey Underall. Put on an anti-viral panty liner and let the battle between the spoiled blonde rich girls begin!