10 Stunning Pieces Of Star Wars Art: A Mashup Of Famous Paintings And Characters From Star Wars

Star Wars fans can get very creative in Adobe Photoshop, but these stunning pieces of Star Wars art are so good that they probably belong in a museum.

The Star Wars art pieces in this article integrate characters from the Star Wars universe into famous paintings. Many of them are so good that they too probably belong on display… at least in an Adobe Photoshop museum.

In this image, Yoda gets Photoshopped into William-Adolphe Bouguereau‘s famous painting from 1897 called ‘Admiration.’ That’s right, all classical half-naked women love Yoda. “Fall in love with me, you will.”

Here’s a Star Wars version of the famous diner painting from 1942 called “Nighthawks” by Edward Hopper. Look closely at the sign. The name of the diner is Isley’s, a reference to Moss Isley Station on Tatooine.

Personally, I love this version of Leonardo da Vinci‘s Mona Lisa with Princess Leia’s face. Is it wrong to like Mona Leia better than Mona Lisa? Hang Mona Leia in a museum, please. Or at least in a bathroom.

In this version of ‘The Last Supper’ by Philippe de Champaigne, Jesus is replaced by Han Solo’s co-pilot, Chewbacca.

Why does Chewbacca look so angry? Where’s the food? Do you really want to be hanging out with a “hangry” Wookie?

Before “Grogu” in The Mandalorian, old Yoda was the original Baby Yoda. But compared to Grogu, Yoda looks like he’d be a very grumpy baby. In this scene, Baby Yoda replaces Baby Jesus.

The Creation Of Grogu (Baby Yoda)

How cute is this Star Wars art piece with Baby Yoda? The original of course is the famous fresco painting called The Creation Of Adam by Italian artist Michelangelo.

Unveiled in 1512, the scene was painted on the ceiling of the Sistine Chapel, the private chapel of the pope, and the meeting place for the papal enclave, where the College of Cardinals gather to elect new popes.

In this Star Was art parody, The Creation Of Grogu, Adam is replaced with Grogu from The Mandalorian, and God’s finger is stretched out ready to give Grogu life, not Adam. This small detail, a finger capable of giving life, has been endlessly parodied and copied, most famously by the movie poster for the 1982 film E.T.

Attack Of The Sistine Chapel Ceiling

Here’s a fantastic Star Wars: Attack of The Clones version of Michelangelo’s painting on the Sistine Chapel’s ceiling.

Here’s a Photoshopped version of the famous 1930 painting “American Gothic” by Grant Wood with Grand Moff Tarkin in place of the farmer. Wilhuff Tarkin was the Empire’s ruthless commander of the first Death Star in Star Wars: A New Hope.

The Scweam With Jar Jar Binks

In this version of Edvard Munch‘s 1893 painting, The Scream, Jar Jar Binks replaces the iconic agonized face of the painting’s main subject.

It’s an appropriate subject swap. The face in Munch’s painting has inspired everything from the scream emoji to the masks in the film Scream. In comparison, Jar Jar Binks is so dreaded and despised that he inspires similar emotions in most Star Wars fans. “Mesa so sorry dat mesa ruined Star Wars.” 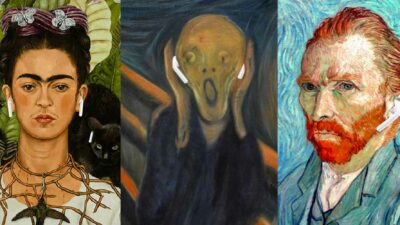 Starry Night Over The Empire

A year before Vincent van Gogh created his famous painting The Starry Night in 1889, he did a similar piece called Starry Night Over the Rhône (1888). This piece of Star Wars art uses the Rhône River as a backdrop for the fight scene between Luke Skywalker and Darth Vader in The Empire Strikes Back.

Can you imagine traveling back in time and trying to explain to Vincent van Gogh that 100+ years later that his painting would be so famous that it would get Photoshopped into fight scenes from sci-fi movies?

Thanks to sites like DesignCrowd that frequently inspire Star Wars photo contests, there are probably millions of Photoshopped Star Wars images floating around the Internet. Most of these Star Wars pictures are fun efforts, but sometimes they go above and beyond. The Star Wars art pieces in this article are the latter.

The 25 Weirdest Statues And Sculptures From Around The World
Next Post:Two NYC Pigeons Commit Premeditated Homicide By Pushing Another Pigeon Into An Oncoming Subway Train