You are here: Home / Entertainment / TV & Film / The Most Memorable Terminator 2 Quotes

The Most Memorable Terminator 2 Quotes

James Cameron‘s Terminator 2 was the most anticipated movie of 1991. The special effects in this science-fiction blockbuster lured an unprecedented amount of movie watchers into theaters to have their collective minds blown by the T-1000, a shape-shifting villain made from liquid metal. The eye-candy attracted the crowds, but the thrilling plot kept them in their seats.

Decades later, people are still quoting this movie. From quippy one-liners to profound existentialist dialogue, this movie had it all. Here are the most memorable Terminator 2 quotes from Terminator 2: Judgment Day.

This iconic line from Terminator 2: Judgment Day is not only the most memorable line of the movie, but it is also ranked #76 on the American Film Institute’s ‘100 Greatest Movie Quotes Of All Time’ list. Nearing the climax of the movie, the T-1000 finds himself frozen in the wreckage of a liquid nitrogen tanker. Arnold Schwarzenegger‘s character, the T-800, drops this quote just before pulling the trigger on his handgun, shattering the villain into thousands of pieces.

This quote is so perfect in many ways. Not only is it a mic-dropping thing to say right before you dispatch your nemesis, but it also shows that the T-800 has learned certain behaviors from John, the human he is programmed to protect, and has applied it to his actions, making him closer to human.

Every hardcore Arnold Schwarzenegger fan recognizes “I’ll Be Back” as the catchphrase he used in over a dozen movies throughout his career. The first usage of this was in 1984’s The Terminator when he played the villain of the film. The catchphrase was anticipated by fans in each movie that Schwarzenegger starred in, and Terminator 2 did not disappoint.

After breaking into the Cyberdyne Systems’ laboratory to steal and destroy the futuristic technologies their scientists were studying, the T-800 leaves John and Sarah to clear a path for their escape. Before walking into the bee’s nest of police gunfire, he smiles at them and delivers the catchphrase.

“Come With Me If You Want To Live”

Some of the memorable quotes in Terminator 2: Judgment Day are lines first said in Terminator (1984) but by a different character in different situations. In the original, Sarah begins the movie as a weak character, a simple waitress in Los Angeles. During her first encounter with the relentless killing machine, she is saved by Reese, who says this to her as he saves her life.

In Terminator 2, this phrase is used again in a very powerful moment. The last time Sarah had seen the T-800 in the original, he was trying to kill her and had already successfully killed Reese, the man with whom she had fallen in love. In Terminator 2, she doesn’t realize the T-800 is instead trying to save her life and he utters the same quote that Reese had said to her years before.

“I Need Your Clothes, Your Boots Amd Your Motorcycle”

Watching Arnold walk naked into a biker bar, beat up everyone (including throwing a man onto a hot grill), and take what he needs is incredibly satisfying. Half of the scene is from Arnold’s point of view, where his computer-vision is scanning the bodies of the bar patrons, searching for a body type match so he can take their clothes. He approaches his “match” and the scene goes as follows:

The biker takes a drag from his cigar, blows the smoke into the T-800’s face, and then puts the cigar out on the Terminator’s chest. When the T-800 doesn’t react to what should be a painful situation, the biker is alarmed. An enjoyable bar fight ensues and the T-800 gets what he came for.

“I need your clothes, your boots, and your motorcycle.” — #Terminator2 #Terminator #Terminator2JudgementDay #T2 #ArnoldSchwarzenegger Terminator 2 Quotes
Click To Tweet

This Terminator 2 quote occurs while Sarah Connor is in the process of escaping from the mental institution. Leading up to this intense moment, Sarah had picked the locks of her restraints, knocked a guard unconscious, and made it to the front desk. Here she encounters her adversary of the ward, psychiatrist Dr. Silberman, hitting him in the arm with a club and knocking him to the floor.

Sarah then fills a syringe with toxic drain cleaner, which she holds to Dr. Silberman’s neck, allowing her to escape. This Terminator 2 quote (and scene) is important because it shows at what lengths Sarah will go to in order to reach her son. It is a ruthless quote and one of the most memorable of the film.

“I Need A Vacation”

Schwarzenegger is known for dropping cheesy one-liners in his films that help deliver much needed comic relief. In this scene, the T-1000 had just been killed by the T-800 by knocking him into a vat of molten alloy. John runs to the T-800, whose body is severely damaged, his wires and robotic skeleton exposed beneath the skin.

The T-800 gets to his feet and utters, “I need a vacation.” This breaks the tension and allows for a quick laugh before the movie takes a heart-wrenching turn. Sarah and John must then lower the T-800 into the molten steel to eliminate any possibility of his CPU being harvested for research. 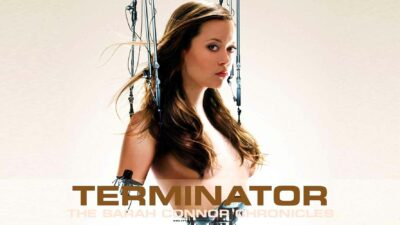 Spice Up Your Love Life With The Terminator Kama Sutra

To this day, Terminator 2 remains one of the best movie sequels ever created. Between the various comic books, TV series, and movie sequels, much of the content in the Terminator franchise is very memorable. However, none of it was able to copy the formula that was so successful in Terminator 2. T2 was the perfect storm of sci-fi, action, comedy, and thriller and will go down as one of the classics.

These are only a few of the many great Terminator 2 quotes from Terminator 2: Judgement Day that revered by fans. What are your favorite Terminator quotes? Please let us know in the comments.

The 14 Best National Anthem Performances Of All Time
Next Post: 7 Of The Most Motivational Rocky Quotes From The Rocky Franchise