30 Of The Most Memorable Top Gun Quotes

Here's a list of the best Top Gun quotes from Maverick, Goose, Viper, Stinger, Jester, Iceman, and the rest of the Top Gun cast.

Here are the best Top Gun quotes from Maverick, Goose, Viper, Stinger, Jester, Iceman and the rest of the Top Gun cast.

And if that collection of accolades isn’t impressive enough, there’s another reason we are all still talking about Top Gun decades later. The script. The film is full of memorable lines and lots of great fighter pilot trash talk. Here’s a list of the best Top Gun quotes from Maverick, Goose, Iceman, and the rest of the Top Gun cast.

The Need For Speed

Out of all of the Top Gun quotes on this list, this quote might be the most famous.

When Maverick and Goose encounter aggressive Russian MiG 28 fighters, they need to respond but show restraint and not use their weapons. Instead, both sets of pilots attempt to outmaneuver each other using their flying skills. Maverick clearly wins this encounter for the Americans by turning his F-14 Tomcat upside down over the MiG so they can give the Russian pilots the middle finger and take a Polaroid picture of the encounter.

Going Mach 2 With Your Hair On Fire

Maverick is a hot head and his love interest/flying instructor, Charlie, tries to get him to find a middle ground between being an amazing pilot and having a deathwish.

“You’re not going to be happy unless you’re going Mach 2 with your hair on fire.” – Top Gun Quotes #TopGun #TopGunMovie #TopGunQuotes #Maverick
Click To Tweet

It’s Time To Buzz The Tower

At the end of a great flight session, Maverick requests permission for a tower flyby. His request is denied but that doesn’t stop him. This Top Gun quote is just another example of Marverik’s reckless attitude that makes everyone both love and hate him at the same time.

You Can Be My Wingman

Maverick’s rival in the film is Iceman, played by Val Kilmer. Even though they are very competitive, they both know that they are fighting on the same side. After Maverick saves Iceman in combat, the two former enemies have this touching exchange on the ground.

Just A Walk In The Park

Are You A Good Pilot?

I’ll Have What He’s Having

Maverick’s love interest in the film is Charlie, his flight instructor. In this scene, Charlie jokes that Maverick is drinking hemlock, an ingredient commonly used in witchcraft.

Let’s Have Some Fun With Him

That Was Some Of The Best Flying… Until You Got Killed

This quote from Jester criticizes Maverick’s recklessness, and the potential jeopardy that it puts the rest of the team in. Making it even more biting, Jester delivers this ego smashing verbal jab in front of the other pilots while they are all in the locker room.

“That was some of the best flying that I’ve seen to date — right up to the part where you got killed.” – The Best Top Gun Quotes #TopGun #TopGunMovie #TopGunQuotes
Click To Tweet

This is one of the most famous Top Gun quotes. But did this phrase originate in Top Gun or did they just repurpose it? Let us know in he comments if you know.

“It’s classified. I could tell you, but then I’d have to kill you.” – Top Gun Quotes #TopGun #TopGunQuotes
Click To Tweet

You Don’t Own That Plane! The Taxpayers Do!

“You don’t own that plane! The taxpayers do!” – Top Gun Movie Quotes #TopGun #TopGunMovie #TopGunQuotes
Click To Tweet

If You Think, You’re Dead

“This is what I call a target-rich environment.” – Top Gun Movie Quotes #TopGun #TopGunMovie #TopGunQuotes
Click To Tweet

Take Me To Bed Or Lose Me Forever

Meg Ryan was only 25 at the time she was in Top Gun. Just imagine Meg Ryan in her prime asking you to take her to bed. Yes, please!

Tower, This Is Ghost Rider Requesting A Flyby

No Points For Second Place

In an attempt to demoralize Maverick and Goose, Iceman’s partner, Slider, makes it clear that their team is aiming for the Top Gun trophy.

Your Ego Is Writing Checks Your Body Can’t Cash

Maverick is good as he is bad. After Stinger, his commanding officer, reviews all of Maverick’s flying accomplishments, he follows up with a list all of his mistakes. Stringer then says one of the most classic Top Gun quotes of the film, “Son, your ego is writing checks your body can’t cash.”

The Plaque For The Alternates

If you had to pick only one Val Kilmer Top Gun quote, then this would probably be it.

“The enemy is dangerous. But right now, you’re worse than the enemy. You’re dangerous and foolish.” #TopGunQuotes #TopGun #TopGunMovie
Click To Tweet

Funny Top Gun Movie Quote: “If you screw up, you’ll be flying a cargo plane full of rubber dog sh*t out of Hong Kong!” #TopGunQuotes #TopGun
Click To Tweet

Talk To Me Goose – How Maverick Copes With Goose’s Death

Maverick might be an incredible pilot, but it’s clear that Maverick and Goose are a team. Throughout the film, Maverick shows how much he relies on his copilot, Goose, by repeatedly saying “Talk to me Goose.” Even after Goose tragically dies in an accident, Maverick still says the phrase when he needs guidance. While grasping his dead friend’s dog tags, Maverick whispers “Talk to me Goose” even though he knows it’s a request that won’t be answered.

All of these great Top Gun quotes are just a small part of what made this film such an immediate hit with audiences. The Top Gun movie made $356 million dollars worldwide for Paramount Pictures and almost everything it touched turned to gold. Here are some highlights. 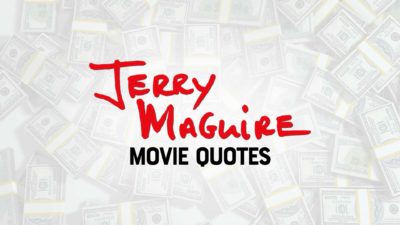 Show Me The Money: The 11 Best Quotes From Jerry Maguire 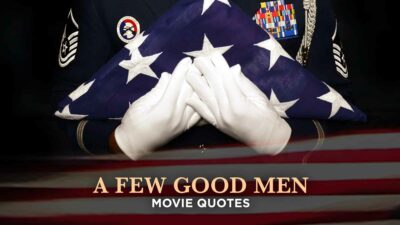 A Few Good Men Quotes: The 12 Most Dramatic Quotes From The Film

What are some of your favorite Top Gun quotes? Which member of the Top Gun cast is the best pilot or gave you that loving feeling? How much do you love the opening scene on the aircraft carrier USS Enterprise? Please post a comment below.

7 Fun Things To Ask Alexa On St. Patrick’s Day
Next Post: 250 People Pick Up An Amish Pole Barn And Take It For A Walk