Remember that 3D hologram of 2Pac performing on stage with Snoop Dogg? It was the most talked about moment at the Coachella Valley Music and Arts Festival last April. Remember how excited everyone was and all the talk of bringing people like Elvis back on tour? Well, sorry Elvis fans. Digital Domain Media Group Inc., the company behind the hologram technology, filed for Chapter 11 bankruptcy protection last week.

It’s a sad ending for a company that showed such innovation in the special effects industry. Digital Domain Media Group Inc. was founded by famed director James Cameron. They’ve produced award winning work on more than 90 movies including Titanic, Pirates of the Caribbean: At World’s End and the Transformers series.

Unfortunately, it looks like Digital Domain Media Group Inc. simply just ran out of cash. According to court filings, the company had violated its lenders cash and debt requirements and defaulted on a series of loans. Debt holders have agreed to provide up to $20 million in financing that will fund its activities while Digital Domain restructures.

Will The 2Pac Hologram Ever Go On Tour?

So will Elvis fans ever get to see a hologram version of the King in concert? Will the 2Pac hologram get to go on tour? The good news is Digital Domain is being restructured and not liquidated. Guess we’ll just have to wait and see. 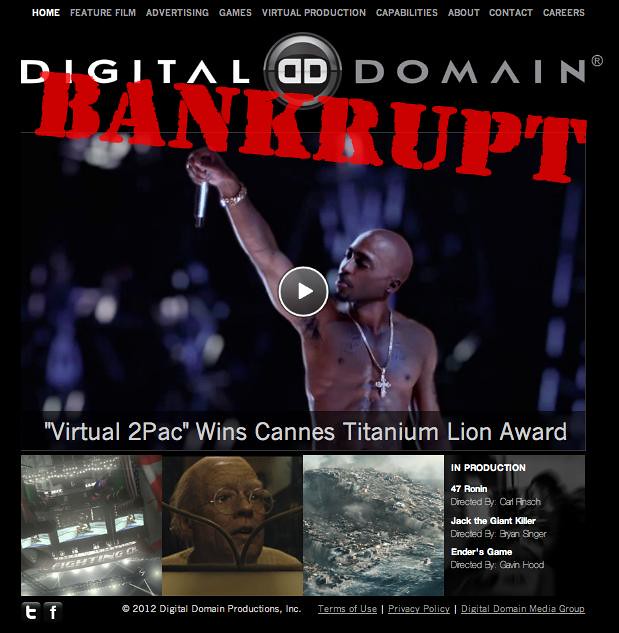 Kid Tries to Pay Police With $137 Dollars Individually Folded Into Origami Pigs
Next Post:What body part did Mario use to hit blocks and bad guys? [pic]