Usually, you’d fear for your life and run away from a Tiger. But when the “Tiger” in question is the latest operating system from Apple, you can expect quite a different response.

THE CAT IS OUT OF THE BAG
Tiger made its debut last night worldwide. In the US, hundreds of loyal Mac users lined up at Apple Stores from SoHo to San Fran.

Spider Goodlegs made the journey over to the Apple Store in LA and snapped a few photos. While J. Love hopped the subway down to SoHo to reactions from the New York fans.

They both found a variety of Mac loyalists waiting to get their hands on Tiger. Some people dressed up in Tiger outfits, or like iPods, while others danced in the streets to the famous fight song “Eye of the Tiger” from the Rocky soundtrack.

But what type of person lines up outside on a Friday night to get an update to a computer operating system? Love and Spider were on a mission to find out.

NEW YORK
“I just wanted to check out the [Tiger] crowds on my way home and got sucked into standing in line,” said Wade, 29, of the Hoboken, NJ. “I have an iBook and iMac DV at home and use them to maintain my website and make iMovies. I was gonna buy Tiger anyway, why not get it now?” 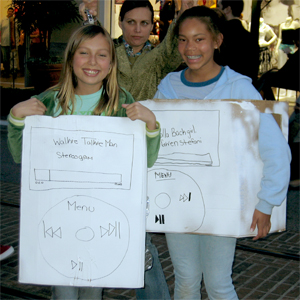 “After talking trash about Macs for years, I finally got an iPod as a gift for Christmas last year and loved it! I’ve done a total 180˚ when it comes to Apple,” said Lucy, 25, of Queens, NY. “My boyfriend and I got a Mac Mini last month to replace our virus ridden PC. We love our new computer so much that we wanted to get the latest operating system for it. We’ll probably be up half the night playing with Tiger.”

LOS ANGELES
Spider spoke to the manager at the Apple Store who said the fire marshall required that they line people up outside and bring everyone in gradually. They closed their doors at 5pm for an hour and prepared for the carnage. After changing into black shirts with Tiger features such as Dashboard or Automator highlighted on it, they opened the doors at 6 to a line that led almost all the way to the Farmer’s Market. Scratch off tickets were handed out for a chance to win an iPod or a Powerbook G4, but everyone won a 10% discount in a store notorious for never having a sale. 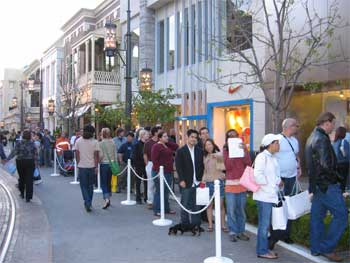 Before 5, many of the employees were dreading just what might happen when the Tiger was released. One black shirt said “they’re gonna brief us on it. We’re gonna be open till midnight. I’m kind of scared. I wasn’t here for the release of Panther but this should be a doosie.”
Apple Store (Grove) shut down their Genius Bar (thank God) and put the “geniuses” on the floor. They also used the bar to set up registers. During the Tiger presentation it was standing room only.

Spider also discretely listened in on a few conversations:

Two guys waiting downstairs for their friend see him return with a bag.
“You got it? Sweet!” [high five]
“Yeah. It was almost four hundred bucks.”
“What? Why?”
“Well. I got an iPod, too.”

To quote Ivan Brandon, author of the popular Image comic book series, NYC MECH, “who lines up and dresses up for the release of a new Windows program?”

TIGER VS. LONGHORN
While Mac fans may not be afraid of Tigers, you can bet Bill Gates and company are currently crapping their pants. When it comes to operating system innovations, Apple is traditionally ahead and sets the standard for Microsoft to either copy or exceed. The 200+ enhancements and features built into Tiger is just additional pressure on the Microsoft folks in Redmond. According to recent press reports, Microsoft is probably a year away from releasing “Longhorn,” the successor to Windows XP. Tiger’s release could possibly push that date back a little more.