Why DDoS Attacks Are On The Rise Around The World

DDoS attacks are not only on the rise, but they are going global. From cryptocurrencies to political attacks, here are all the reasons why.

For a long stretch of time, it wasn’t worth doing much reading about which countries were being targeted by DDoS attacks. Why bother looking into it when you could just say “the US and maybe the UK, right?” and move on with your life knowing you’d nailed it. DDoS attacks are not only on the rise, but they are going global. From cryptocurrencies to political attacks, here are all the reasons why.

Denying Services Around the Globe

Distributed denial of service (DDoS) attacks has been a significant problem for website owners, businesses, governments, and organizations since the early 2000s. But recently things have really heated up, especially for sites and services hosted in the United States and the United Kingdom.

However, with an ever-increasing number of DDoS attacks taking place for an ever-increasing number of reasons, the countries leaping to the top of the most-targeted lists are changing every quarter. According to denial of service protection provider Incapsula, the first quarter of 2017 saw Japan, the Netherlands and Singapore join the top five list after the US and UK. While the second quarter saw Spain, Singapore, and Hong Kong took the honors. Then in the third quarter, things got crazy with Hong Kong topping the list, the US coming in second, and Germany, the Philippines and China following behind.

Not the best way to finally find yourself beating the United States at something.

Why Some Countries Become Sudden Targets

Sometimes when you see a country vault to the top of the most targeted list, it can be traced back to one major campaign against a specific target. This is how Hong Kong came to top the list in the third quarter of 2017 after 700 DDoS attacks were launched at a local hosting provider.

Hong Kong also previously rose in the ranks when websites promoting a push towards democracy were bombarded. These attacks allegedly originated from the Chinese government. Many major spikes in DDoS attacks are due to political motivations, with both nation-states and so-called hacktivist groups taking aim. For instance, Ukraine has allegedly been famously targeted by Russia. And Brazil was barraged in 2016 by hacktivist group Anonymous who purportedly took issue with the country hosting the FIFA World Cup. These attack influxes are typically fast but furious, with hacktivists and nation-states either lying low for a while or moving on to their next target. For some countries, however, an increase in attacks isn’t a temporary thing.

In the near future, it’s likely that countries like the US and UK will see a bit of a decline in the number of attacks targeting its sites and services. There’s one good reason for this: law enforcement. Agencies like the FBI are beginning to gain ground against cybercriminals, with members of hacktivist groups being arrested, DDoS botnets being disbanded with their founders arrested, and even end-users of DDoS for hire services being convicted and sentenced for their dirty DDoSing deeds.

Countries may also see a lasting uptick in the number of incoming attacks due to the types of online services hosted in that country. While countries like Bulgaria and Slovenia may have never considered themselves likely DDoS targets, their hosting of popular cryptocurrency exchanges like Bitcoin, may make them new targets. That’s part of the reason why Bitcoin is illegal in some countries.  Japan has already experienced this with exchanges like Coincheck and the now-defunct Mt. Gox. 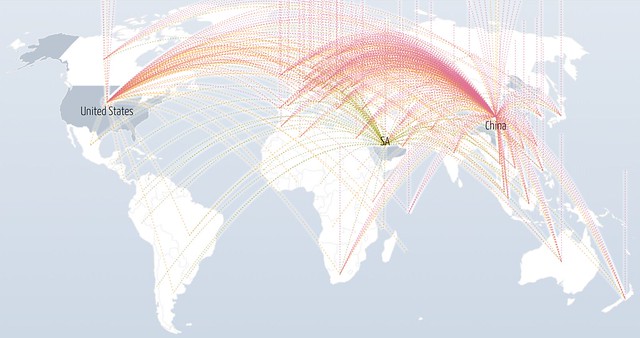 Similarly, Taiwan and the Philippines also reached the top five most targeted countries in Incapsula‘s list from the third quarter of 2017. This is due to the online gambling websites hosted in their regions. Online gaming and software as a service are also frequently targeted industries, upping the numbers for any country in which those platforms are hosted.

Every Country Is Now A Target

In the past, it may have seemed pointless to closely track distributed denial of service trends amongst countries. It was always just the United States and the United Kingdom. But in the near future, it may seem just as pointless as every country is likely to eventually be inundated with these attacks that are always growing in size, sophistication and, of course, frequency. What needs to become a global trend right alongside DDoS attacks is professional DDoS protection. Otherwise, websites and businesses the world over will quickly be learning that cyber misery knows no borders.

16 Simple Motivation Tips to Get More Done
Next Post:4 Awesome Business Printers For Your Office (2018)