Joel Dovev is an actor, comedian and NEW author residing in New York City. His new book and calendar "Crap At My Parents House" can be pre-ordered now and chronicles the weird and wonderful things (like "crotch powder") that we find at our parents' houses. 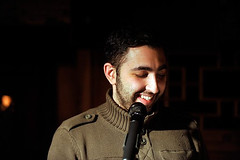 Joel Dovev is an actor, comedian and NEW author residing in New York City.  His new book and calendar “Crap At My Parents House” can be pre-ordered now and chronicles the weird and wonderful things (like Crotch Powder) that we find at our parents’ houses.

How long have you been a comedian and why did you become one?

I guess I have always been a comedian but I think I was about 12 when I decided that it was what I wanted to do for a job. To answer the “why” question, I don’t really have an answer other than, I can’t not be a comedian. It is who I am. I also have no other marketable skills, so that helps.

Tell me about the top projects you are currently working on including “Crap At My Parents House.”

The crap at my parents’ house book is coming out September 1st, so that’s pretty exciting. I’ve been working on a web series called “Bruce” about my room-mate who is suicidal after a bad breakup. Oh yeah, he’s also a salt shaker. I’ve just mainly been touring doing stand up, trying to write some stuff geared for TV and auditioning for a whole bunch of stuff. Really just gearing up for the release of the book, which is already available on pre-order in the US and the UK. 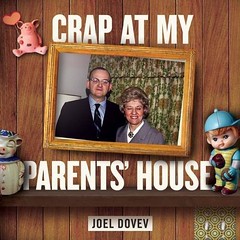 What is your dream gig and why?

The Easter Bunny. The guy craps chocolate eggs and looks like he’s constantly tripping on acid. I also think a croupier

What is the craziest job you have ever had and why?

I worked at The National Yiddish Theatre selling tickets. That was pretty crazy. Their audience was often, how should I say, really old and mean. One 80 year old gentleman called me an idiot for not knowing he had a bad knee and I really considered punching him in his face. Sadly, I didn’t. It was also located across the street from Riverside Memorial Chapel, so if dealing with bitchy old people wasn’t bad enough, I got to watch hearse after hearse unload bodies all day. I also worked at Taco Bell in high school. That was pretty fun and painless compared to selling tickets.

Is being funny learned behavior or is it in the DNA?

I think it’s maybe a little of both. It’s kind of like being an asshole. Some people are just born with a stick up their ass, and others have developed the skill of being a miserable human being through time and learned experiences.

What are your favorite jokes?

My favorite joke is also by my favorite comedian, Kevin Downey, Jr. The guy is brilliant. I know I’m probably going to going to butcher it but here goes nothing. “I’m writing a book for women who date men with small penises. The book is called, He’s not that into you.”

My favorite joke that I tell is a bit about how I’m jealous of pandas – When they don’t have sex, a team of scientists descend and it is their job to make sure those pandas get laid. I don’t have that.

What is the best advice you can give an aspiring comedian?

Don’t scream into the mic. I hate that.

Is it true what they say about comedians being miserable people?

Is that what my psychologist told you? Cause I think I’m doing much better, thank you very much.

What is your favorite MethodShop article?

I liked the interview with Spencer Elden, the baby on the cover of Nirvana’s Nevermind. I have always wondered what that kid would be like as an adult. Like, when you have friends over and you mom tries to show everyone pictures of you in the bath when you were a baby, [it] is embarrassing. But [imagine when] everyone has owned a picture of your wiener, on cassette nonetheless.