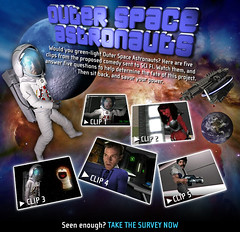 Sci Fi.com and Sci Fi Magazine are asking Internet users if they should pick up a new sci-fi comedy called Outer Space Astronauts.

Visitors are given access to 5 vignettes from the show on the SCI FI Pulse Broadband Network and asked to fill out a survey explaining what they think. Sci Fi says it will also take traffic into account when deciding whether or not to pick up the show.

Think you know how to program the American Sci Fi Channel better than NBC Universal? After they started airing wrestling on the Sci Fi Channel… who doesn’t.

You can watch the Outer Space Astronauts clips here.