You might have heard about cutting your cord because of “Over the Top Television“. This is the ability to get programming on your TV using the Internet. By using Netflix, Amazon or Hulu (like I talk about in the comparison) you could save yourself $100+ a month in cable subscriptions.

If you do that, you need a device that will give you alternate programming. Connecting a PC does work but if you don’t want that bulky box in the living room, a Set top box becomes a great alternative. There are many out there but what has the best value? You may know about Apple TV and Google TV, but did you know they are overshadowed by other set top boxes that deliver more content? Did you also know you can use your game system as a set top box?

Let’s take a look at the good and bad of each set top box.

Apple has been working on set top boxes since 2007. Their latest Apple TV can stream content at 1080p (if your internet connection and TV can support it). Apple TV works in the iTunes playground – you can use your iTunes account to purchase or rent movies and TV shows. You can also purchase and listen to music.

Turning on your Apple TV to share on your network allows you to download video on a computer, then push to the Apple TV (literally turning it into a second monitor). You can also send photos and video from iOS devices (iPad, iPhone) to your TV. This is all using a service called Airplay.

Apple TV comes in one version. The Apple TV box is $99 and based on the iOS6 operating system.

Apple TV is somewhat seclusive. The apps on the screen are what you got. There is no SDK (Software Development Kit) available for the public. They were planning to open it up but decided not in the last minute.

iTunes is the only game for buying or renting movies. If you have Vudu or Amazon, you are out of luck with an Apple TV.

6 million Apple TV’s have been sold. It’s the largest market share for set top boxes, however it’s only a small part of Apple. The iPad (84 million), iPhone (85 million) and Mac lines overshadow the Apple TV market.

Although Airplay is available, it can be blocked by apps. For example: if you have the Netflix app on your iPad and push it to Apple TV; it might come back with “Cannot support this device”.

Very little applications are available for the system. You can get Netflix, Hulu Plus for your movie needs. Sports apps include NHL and NBA apps. Since there is no SDK, independent video creators are relying on iTunes listings.

Google wanted to turn the Google TV into a companion to over the air television. For example, if you are watching CNN, you get a more interactive experience. Watch live or check out the content online.

Google TV also puts the Chrome Browser on the big screen. You can use the device just like a computer if you needed.

Google TV is the only device out of the 4 that is sold as a set top box or included in a TV. LG, Sony all have Google TV devices.

Google had some major setbacks on their first generation of the device. Many Internet channels were blocked from Google TV. The second generation came out and a lot of people stayed away. Logitech – who invested in Google TV gen 1 – has backed away from the over the top TV giant. Since then they have been moving forward at a slower pace.

Google is priced at $200 for a set top box and prices vary for an integrated TV. 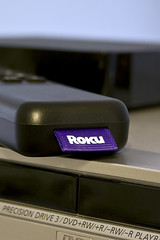 Roku is the largest set top box without a big name tech company (like Microsoft or Apple) behind it. They instead have media companies News Corp and British Sky Broadcasting. Roku has also spun some great deals – such as a partnership with Twentieth Century Fox (a subsidiary of News Corp).To date 3 million Roku devices are out there.

You can connect your Roku to a HDTV or old 19″ CRT through the AV cable (and a converter box). That way you can watch shows in the living room or down in the basement where your old TV might sit nowadays.

Roku is also available starting at $50 and no more than $100. The Roku 2 XS is also a gaming system – with simpler games such as Angry Birds, Pac Man, Galaga and more.

The biggest gripe is their navigation system. A single line of choices you have to pass through to get to the channel you want.

Otherwise the Roku system works really well and is the most versatile set top box out there. Anyone can program games or channels for it and there are versions that work for any family.

Boxee is another set top box that came out a couple years ago. It has 2 million user market share which is slightly muddled because they offered software for PC and Mac that would emulate the Boxee on their desktop.

The Boxee comes with a full QWERTY remote on the reverse side of the standard remote. That is something all the other set top boxes seemed to miss out on.

Boxee apps are really easy to program for. If you have basic knowledge in XML, you can create your own Boxee channel. You can customize a lot on the Boxee with skins and applications.

Boxee is planning a release of a HDTV / DVR combo (from the Verge leaked photos). It would let you record live TV from your coaxial source (but not the app programming). It has not been released as of yet.

To begin with, they discontinued the PC/Mac software. It was because more people had the software than purchased a box – which costs $200. Boxee cannot play protected or encrypted files. Anything with DRM needs to be taken off before played.

Boxee’s shape is a little odd and meant to be displayed. An Apple TV or Roku could easily be fastened to the back of a TV – Boxee cannot.

Boxee has also touted they have over 400 apps. Unfortunately there are a host of dead apps on the Boxee due to upkeep issues.

Although they have such high numbers, people still use their gaming systems like gaming systems. Some tech-savvy connoisseurs have turned their consoles into media centers. In some cases, there are subscription fees associated that could match cable TV prices.

The XBox 360 will also connect with Media Center on a PC to watch TV, recorded shows or apps.

On the other hand the Playstation 3 also connects up to other libraries so you can watch video. Their app store is not huge but you can do the regular set top box apps like Netflix, Hulu, MLB.tv and more.

Other Set top Boxes – Built in apps to TV, Blu-Ray

There is technically a whole host of other devices out there. They come with select TVs and Blu-Ray players. Western Digital has a portable hard drive that can play video on your TV. These systems are limited to only a few apps like Netflix, Hulu or Vudu. They might have a few other apps to choose from but for the most part they come with the apps the people want on their devices.

While at CES last year, I saw a set top box in the Intel booth geared toward the cable companies. This would be a box that receives and processes your digital channels and DVR functions; they also would have Internet apps and more games to play.

It could get rid of a need for DVR. Only downfall is Hulu can edit the content. Saturday Night Live – for example – gets cut down to an hour and change. Sometimes the musical act gets removed, other times it’s the content ; such as Joseph Gordon-Levitt’s Magic Mike parody during the monologue. It all has to do with licensing in that case.

So Which Will You Choose?

There are many options out there. You can go with the popular, the underdog, the built-in devices or just stick with cable TV. There is no doubt Internet TV (also known as IPTV) and over the top television will grow. Big question is: will it grow to the point it pushes cable TV out.

The answer right now is “Not just yet”. There are too many cost issues involved.

I always said, the first TV station that can pick their channel off cable and put it on a subscription model to a Roku or Boxee is going to not only win, but set the standard for the future of TV. Once that happens, it will be a whole new game.

Is Internet Explorer still your default web browser? Why?
Next Post:The Pirate Bay Makes Itself Raid-Proof By Moving To The Cloud (2012)