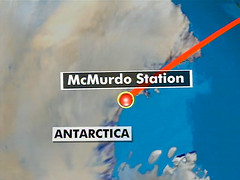 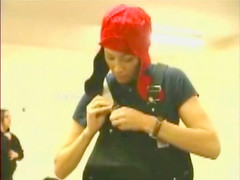 Antarctica is a huge desert. Even though it’s one of the coldest and windiest places on earth (average temp is -56º F), it has little or no precipitation, which classifies it as a desert. However there’s hidden plant and animal life that draws the attention of thousands of scientists every year, and interestingly enough, NBC’s “Today Show.”

The “Today Show” sent Ann Curry to Antarctica this week for a segment called The Ends of the Earth set to air on Nov. 5th and 6th. While there, Ann is going to explore Antarctica’s ecosystem from McMurdo Station, and discuss the continent’s melting ice and many life forms.

While it might seem like Antarctica is covered with a bunch of igloos, McMurdo Station is actually an efficient little town. It’s situated on volcanic rock along the frozen sound where it was constructed in the 1950’s by the U.S. Navy, and it’s grown consistently ever since. Next week Ann is giving a personal tour of McMurdo which should give some great first-hand insite to what it’s really like there.

Once at McMurdo, you can hang with 1000+ scientists and attempt some eco sight seeing. You have to look hard though because Antarctica doesn’t have extensive vegetation or animals since the combination of freezing temperatures and little sunlight prevents extensive growth.

But thankfully Antarctica’s marine animals are pretty large and easier to see. They include penguins, blue whales, orcas and fur seals, and are all carefully guarded under the Antarctic Treaty. Ann Curry’s plans do include a date with some penguins, but also a trip to the South Pole, a flight over an active volcano, and who knows.