These bacon gifts are fun and won't break the bank. From bacon bandages to action figures, here are the best bacon-related gifts for bacon lovers.

Chances are, you have a few bacon-loving friends (at least according to this bacon poll). So why not give them the gift of bacon? Bacon gifts! Great idea right? To help out with this list of bacon gifts, we asked the infamous “Bacon Queen“, Amy Vernon, to comment on our selections.

These bacon gifts don’t just celebrate all things bacon (aka the candy of meat), but most of them won’t break the bank.

Bacon Panties: Bacon Gifts For Her

Bacon Queen Says: “Only my husband knows what’s in my underwear drawer.”

If you’re looking for some fun bacon gifts for guys, then sink your teeth into these “I Love Bacon Sports Briefs” with a crispy bacon strip waistband. Yum! Bacon Briefs ($4+)!

From meat to pressed sandwiches, an iron grill press is a handy grilling accessory to have around your kitchen or BBQ grill. Stop smashing your spatula into your food and cook your food evenly with a bacon grill press ($14+).

Bacon Queen Says: “This looks like fun. I’m already thinking about foods that I can press and adding them to my lists of bacon gifts for him and bacon Valentine’s gifts.”

Can bacon help fight cavities? You know it! Bacon Toothpaste (~$20) is full of actual bacon-flavored toothpaste. Brushing before bed was never this much fun.

Bacon Queen Says: “In all honesty, brushing with bacon-flavored toothpaste before bedtime would just make me hungry and head to the kitchen to make bacon. I would probably only use this in the morning.”

These Bacon Socks ($4+) have a bold red leg and foot, white toe and heel, and BACON spelled in big, white block letters down each calf. It’s a strong color combo that shows your love for the tastiest meat treat on the planet. These casual unisex socks are designed to fit a variety of leg shapes for men and women shoe sizes 6-12.

For something a little more formal, how about these bacon dress socks? It’s one of the perfect bacon gifts for him. Excellent for the office, weddings and other formal occasions.

Bacon Queen Says: “I know what I’m asking Hanukkah Harry for this year.”

Mr. Bacon’s Big Adventure Board Game ($15+) is the most mouth-watering meat-centric board game ever created. Join Mr. Bacon in his mouthwatering journey to the frying pan! It comes with alternate rules that turn the game into a gluttonous meat feast. Ages 8+.

Bacon has the power to make everything better, even flesh wounds. Each tin container is full of Bacon Bandages ($6+) and contains a bonus trinket.

Bacon Queen Says: “I actually already have these. The main problem is that I don’t want to use them up.”

These Bacon Candy Canes ($6+) might look like regular peppermint flavored candy canes, but they have a secret ingredient… bacon! If you are looking for some funny bacon gifts for Christmas, then it doesn’t get much better than a box of Bacon Candy Canes.

Bacon Queen Says: “Don’t use these to decorate your Christmas tree, because I’ll just steal them.”

The “My First Bacon” Bacon Plush Toy ($75+) toy will delight the little ones in your life. Even if they’re not on solid foods yet, your progeny shouldn’t be deprived of the joys of bacon. Soft and snuggly with big giant eyes, My First Bacon™ says, “I’m Bacon!” when you squeeze him. Requires 3 x AA Batteries. Dimensions: 19″ tall by 7″ wide.

Bacon Queen Says: “When this changed from an April Fools joke to reality, I knew it was just a matter of time before I bought one. It’s on my wishlist this year.”

Wish you could fill your house or car with the smell of bacon at all times? The Bacon Air Freshener ($6+) is a perfect way to use scent to make a carnivore smile. Put a bacon-scented air freshener in the family room and everyone will have a sudden craving for a BLT. Put another bacon-flavored air freshener in your car and you’ll be pulling over at every cheap diner and burger joint on the way to your final destination.

Bacon Queen Says: “My main problem with this is that I’d probably start drooling while driving. Have you ever seen me drool while drive? It’s not pretty.”

Savory bacon flavor in toothpick form. Can you think of a better tool to use to pick bacon meat out of your teeth? This Bacon Toothpicks & Dispenser ($3+) set comes with 80 toothpicks per tin.

Amy Says: “Pfft. Must-have. No one likes someone with bacon in their teeth.”

Bacon lollipops, they’re swirly and sweet and taste like cured meat! One of the must-have gifts of bacon for the pork aficionado in your life. A Bacon Lollipop ($11+ per set) goes great with scrambled eggs and hash browns! Bacon lollipops are perfect for both kids and adults and come in both gourmet and candy versions.

Bacon Queen Says: “Candy: It’s what’s for breakfast. These bacon lollipops are one of the ultimate gourmet bacon gifts.”

Can you think of a better conversation piece than a Bacon Wallet ($9)?! Keep all your money and credit cards organized and secure in this bacon print wallet. Definitely one of those great bacon gifts for dad.

Amy Says: “I haven’t bought one yet primarily because it would just make me hungry every time I bought something.”

Bacon is always a hero at mealtime, but what about the rest of the day? This soft vinyl, bendable Mr. Bacon Action Figure ($26) allows kids to take the heroic powers of bacon with them everywhere they go.

Bacon Queen Says: “He’s the most delicious superhero ever. He may not be able to beat Iron Man but Mr. Bacon can totally take down Monsieur Tofu.”

Bacon Suit With A Bacon Tie Or Bowtie

Want a fun, but formal, bacon-themed outfit? A bacon suit costume ($40) is sure to turn heads and make people drool.

Pair your bacon suit with a bacon tie ($24) or bacon bow tie ($24). Add in a pair of bacon socks and you have the ultimate bacon gift set.

Bacon Queen Says: “I dare you to wear your bacon outfit to a formal event like a wedding or graduation.”

The Bacon Tuxedo Puzzle is the perfect gift for any occasion! This puzzle of an awkward photo is sure to get you an equally awkward “thank you”. If this weird picture isn’t your thing, then check out these fun bacon novelty gifts and puzzles.

Do you love the taste of bacon in the morning? This bacon-flavored dental floss is just the thing for you! The dentist recommends flossing every day and what better way to do that than with this yummy bacon floss. Bacon Dental Floss ($4) effectively removes plaque while leaving your mouth bacon fresh.

Amy Says: “I’m reusing my answer from #1: In all honesty, using bacon-flavored floss before bedtime would just make me hungry and head to the kitchen to make bacon. I would probably only use this in the morning.”

Bacon makes everything better, even hot sauce. The recipe for Bacon Hot Sauce ($5+) has gone through many iterations and was developed in collaboration with a leading food scientist. Out of all of the bacon-flavored gifts, this one might be my favorite. Perfect for people who love both bacon and hot sauce.

After handling and cooking bacon in your kitchen, what should you wash your hands with? Bacon Soap ($6) silly.

Amy Says: “I can’t ever use this before having my vegan friends over for dinner. (Yes, the Bacon Queen has many vegan friends. Go figure.)”

Of all of our favorite gifts with bacon, this bacon chocolate bar just might be the most decadent. The Vosges Haut-Chocolat company’s mission is to create a luxury chocolate experience rooted in a sensory journey of the obscure. To ensure this, Owner/Chocolatier, Katrina Markoff, personally chooses every spice, flower, and chocolate that is flown into their Chicago kitchen. The newest flavor from Vosges’ Mo’s Dark Bacon Bar ($9) combines smoky bacon and sweet milk chocolate. Bacon was always the candy of meat. Now it’s officially a dessert.

Freshen up with the taste of bacon and kiss someone you love. Each tin of Bacon Mints ($5) contains up to 100 bacon-flavored mints. If you’re looking for fun bacon gag gifts, this one is for you.

Bacon Queen Says: “Don’t try to kiss me without them.”

This pack of Bacon Playing Cards ($11) will surely make an impression and probably make your tummy growl a bit. It features 52 different images of everyone’s favorite meat, Bacon.

Start your morning with a hot cup of coffee in a bacon mug. These bacon coffee mugs ($10+) will make you smile with each sip.

Bacon Queen Says: “Guess what’s on my desk at work?”

Love bacon but hate chapped lips? Sounds like you need a tube of Bacon Lip Balm ($4). This zero-calorie bacon treat will help keep your lips moist and meaty around the clock. Warning: Do not eat your lips. Your lips will smell like bacon, but they are not really bacon. They are still just your lips. Seriously, these are one of my favorite bacon-themed gifts for Christmas. Bacon Lip Balm makes a great stocking stuffer.

Bacon Queen Says: “How do you think I hooked my hubby?”

Looking for some funny bacon shirts? From “American Bacon: Taste The Freedom” to “Don’t Go Bacon My Heart”, there are a lot of funny bacon t-shirt designs ($12+) to choose from.

Do you have any fun bacon gifts, not on this list? Please post a comment and we’ll consider adding your favorite bacon lovers’ gifts to this article. 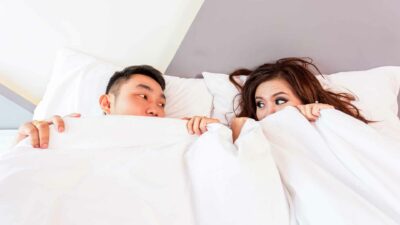 Hit the “easy” button this year. Here are some easy and almost effortless New Year’s traditions to help lazy people ring in the New Year.