A new study by Swedish car magazine Vi Bilägare shows that new cars with touch screen interfaces can take up to four times longer to complete a simple task, like changing a radio station. Using car touch screens instead of physical buttons could take distracted driving to dangerous new levels.

The next generation of automobiles have large touch screens that control every aspect of your driving experience. According to CNBC, 78% of all 2022 model vehicles now have center stack displays in the middle of the dashboard. That right, the physical buttons inside our cars are now mostly gone. Everything from your heated seats to the infotainment system will soon, if it isn’t already, be controlled by a touch screen interface.

But car touch screens require a lot more attention from drivers than physical buttons. This is taking the driver’s attention off the road more often and for longer periods of time. It’s a dangerous situation waiting to happen and many drivers aren’t happy it. So, why are auto manufactures still installing touch screens in cars?

“Like it’s crazy that it’s been made illegal to use your phone while driving but auto manufacturers think it’s necessary for me play a game of Bejeweled to turn on the AC.”

A study by Swedish car magazine Vi Bilägare found that drivers can operate physical knobs and buttons faster than car touch screens. In some cases, it takes drivers 4x longer to complete simple tasks, like changing a radio station, using a touch screen.

For the study, Vi Bilägare gathered twelve cars at a test track. Eleven of the cars were newer model vehicles with touch screen interfaces. The twelfth car was the “control group” car, an older Volvo V70 from 2005 without a touch screen.

Before the evaluation began, the test drivers all had an opportunity to familiarize themselves with the different dashboard interfaces in the vehicles. The test’s purpose was to measure the time it takes to perform tasks, not if it’s possible to learn a new car interface while driving.

Vi Bilägare then carefully measured the amount of time needed for each driver to execute four common tasks while driving at 110 km/h (68 mph). These tasks included things like adjusting the vehicle’s climate controls or changing radio stations.

The results of the test show that the car with the worst performance (MG Marvel R) needs over 40 seconds and travels 1,400 meters (4593 feet) to complete the same tasks as the best-performing car (Volvo V70) which only requires 10 seconds and 300 meters (984 feet).

Here are some insights from the test results:

Besides complicated menus and interfaces, the viewing angle was a major factor in delaying drivers from completing the test tasks. The further away the car touch screen was from the windshield, the longer it would take a driver to use the touch screen menus.

Are Car Touch Screens Putting Your Life At Risk?

Elon Musk‘s Tesla was one of the first manufacturers to install bigger touchscreens in their vehicles. Without physical buttons, Tesla’s touch screens control a majority of the car’s features. For example, even the Tesla’s windshield wipers are controlled through the touchscreen.

“Half the point of the physical buttons/switches is that you don’t have to look at them while you’re adjusting them, which means you can keep your eyes on the road. Touchscreens in cars are a backwards step masquerading as progress.”

But the more time a driver spends navigating car touch screens, the less time they are focused on the road. If you think that this sounds like a potentially dangerous situation, you’re right. Either you or another driver might be busy navigating through complicated touch screen menu options instead of paying attention to the road.

Reddit user just-regular-I-guess had this comment after borrowing their mother’s BMW with a new touch screen interface. “I will say the car has way more settings than mine, but holy shi* it is annoying to go through them while actually trying to, you know, drive. Absolutely nothing is intuitive.”

Touch screens have already proven to be deadly for the US Military. In 2019, the US Navy made the decision to ditch navigation touch screens in favor of physical knobs and buttons after a fatal crash was blamed on touch screen technology. In 2017, 10 sailors died and 58 were injured after the the U.S.S. John S. McCain collided with an oil tanker.

A National Transportation Safety Board investigation of the incident found that the sailors had difficultly using the complicated IBNS (integrated bridge and navigation system) touch screen interface designed by Northrop-Grumman. 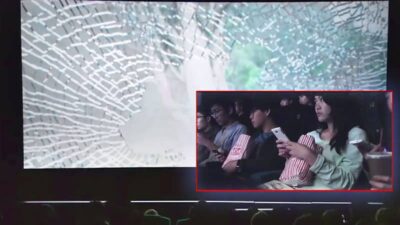 Why Are Touch Screens Replacing Physical Buttons In Automobiles?

Almost all new cars have touch screens, even though buttons and switches provide a safer way to operate the vehicle. But why?

Likely finding inspiration from modern smartphones and tablets, car designers have begun replacing physical interfaces with larger touch screens. Large screens help bring a cleaner design to automotive interiors, but don’t be fooled into believing that this is their primary reason for the change.

Even though a touch screen is a bigger upfront expense, it creates larger cost savings throughout the car manufacturing process.

Take a moment to think about the different cars that you’ve been inside over the years. How many different knobs, dials, switches, and buttons did they all have? Just imagine the cost to design each one of these physical items and then manufacture, store, distribute, and install them. Instead of stocking physical buttons for years to come, car manufacturers can replace these costs with just a single touch screen.

Like anything with an Internet connection, the user is the product. App stores on smartphones and smart TVs have turned subscriptions, advertising, and promoted content into billion dollar businesses. Adding touch screens inside cars gives auto manufacturers a lucrative new revenue stream.

When responding to consumer complaints about complicated car touch screens, auto manufactures are quick to shift the conversation to voice commands. In theory, drivers will be able to control most elements of the vehicle using their voice.

However, as we all know from our interactions with Siri and Alexa, voice control systems are not always easy to use. Personally, I struggle just to get Siri to play music that I want to hear in my car. I can only imagine how frustrating it will be to ask Siri to adjust the speed of my windshield wipers

The Vi Bilägare study and others like it, all provide quantifiable data that prove how inefficient and dangerous touch screens in cars can be to drivers. But what are drivers saying? Do they want physical buttons or touch screens inside vehicles?

Here’s a sample of some of the messages posted by Reddit users commenting on the Vi Bilägare study.

It’s no wonder that so many drivers say “I hate car touch screens” – they’re simply too easy to distract you from the road.

What About Hybrid Interfaces That Use Both Touch Screens And Physical Buttons?

If touch screens in cars offer more advanced capabilities, but physical buttons are safer and easier to use, doesn’t it make sense to design automobiles with hybrid interfaces? Yes, it does, but it doesn’t mean that system will be easy to use.

For example, the BMW iX has both a big touch screen and physical buttons within the driver’s reach. But it also has one of the most frustrating and complicated user interfaces ever designed. Trying to navigate the BMW’s complicated touch screen infotainment system is so difficult to use that drivers are probably better off just pulling over than risking an accident.

The Volkswagen ID.3 and Seat Leon also have major design flaws. They both have touch-sensitive climate controls below their touch screens that aren’t backlit. At night, these control are difficult to see.

“I consider the Polestar one pretty good,” added Reddit user knorkinator. “(The Polestar) has huge buttons for everything and very shallow and logically laid out menus, requiring minimal effort to find what you’re looking for. It could still use some dedicated climate buttons, but other than that, it’s very well-made.”

Clarifying their types of preferred button functions, Reddit user tribat added, “I would prefer dedicated buttons for the basics like wipers, AC control, volume, windows, etc. Touchscreen for the stuff you’re unlikely to have to do while driving is fine.”

Based on driver feedback, auto manufacturers should consider reintroducing physical buttons into new vehicles. Both qualitative and quantitative data suggests that physical buttons could help save drivers from dangerous distractions.

“I would prefer dedicated buttons for the basics like wipers, AC control, volume, windows, etc. Touchscreen for the stuff you’re unlikely to have to do while driving is fine.”

Right Now, Drivers Are Saying “I Hate Car Touch Screens”, But Will They Slowly Begin To Accept Them?

One of the initial consumer complaints to the iPhone’s touch screen interface was the lack of a physical keyboard. Because the BlackBerry had a full keyboard, loyal users, including U.S. President Barack Obama, kept their old smartphones long after the iPhone eclipsed the BlackBerry in popularity.

However, all things come to an end. Consumers eventually adapted to large smartphone touch screens and BlackBerry went out of business while Apple posted record profits from iPhone sales. The benefits of apps and larger screens eventually outweighed the comfort of having a physical keyboard.

Will the same thing happen with car touch screens? Will drivers eventually adapt to not having physical buttons in their vehicles? Or will the roads just become increasingly more dangerous as drivers try to fumble through complicated interfaces that take our attention off the road?

What do you think? Would you rather have a touch screen radio interface or physical buttons? What about other car functions?

50 Easy Business Travel Tips For Millennials And Gen Z Professionals
Next Post:How To Check Your Internet Speed Yourself, Before Calling Tech Support For Help