Ahead of their time, The Grateful Dead make for a great case study in contrarian marketing. They achieved success by doing what most other bands weren't doing... or by doing the opposite of what others were doing. The Dead were true marketing innovators of their time.

There were definitely a few hardcore Grateful Dead fans at this year’s SXSW conference and they proudly stood to be recognized by speaker David Meerman Scott (FreshSpot Marketing) as he spoke to the enthusiast crowd about his book, “Marketing Lessons from the Grateful Dead: What Every Business Can Learn from the Most Iconic Band in History“.

One Deadhead in the audience won the prize for following the Dead to over 250 of their concerts. This proved Meerman Scott’s point that “the Dead” were extremely successful in creating a great brand (and band).

NERD NOTE: The Grateful Dead constantly toured throughout their career, playing more than 2,300 concerts around the world.

Ahead of their time, The Grateful Dead make for a great case study in contrarian marketing. They achieved success by doing what most other bands weren’t doing… or by doing the opposite of what others were doing. The Dead were true marketing innovators of their time.

5 Marketing Lessons From The Grateful Dead

Here are a few marketing lessons we can learn from this cultural icon and American jam band: 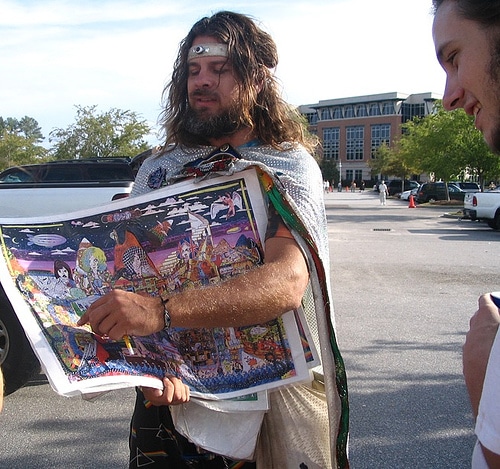 Do you build or develop brands or communities? Put on your favorite Skull and Roses song or stream a free Grateful Dead  “taper” recording and create something that no one has yet to experience.

As David Meerman Scott (@dmscott) closed the “Marketing Lessons from the Grateful Dead” SXSW discussion, he reminded us that: “Once in awhile you get shown the light in the strangest of places if you look at it right.”

NERD NOTE: The name “Grateful Dead” was chosen from a dictionary. According to Phil Lesh, in his biography (pp. 62), “…[Jerry Garcia] picked up an old Britannica World Language Dictionary…[and]…In that silvery elf-voice he said to me, ‘Hey, man, how about the Grateful Dead?'” The definition there was “the soul of a dead person, or his angel, showing gratitude to someone who, as an act of charity, arranged their burial.”

Tips On How To Organize Your Connections After SXSW Austin
Next Post:Is this the worst Star Trek fight scene… ever?