From outraged retailers to an STD computer virus hoax, here are some things that you probably didn't know about the Leisure Suit Larry games.

The Leisure Suit Larry games are one of the most infamous game franchises of all time. Controversial for its time (and even still today), the games feature a pathetic protagonist that gamers have to help get lucky.

Before Leisure Suit Larry, no software company had been able to combine humor, 2D adventure gameplay, and sex into a commercially successful game before. From outraged retailers to an STD computer virus hoax, here are some things that you probably didn’t know about the Leisure Suit Larry games.

Before he was a software developer, Al Lowe, the creator of the original Leisure Suit Larry games, was a high school music teacher. While still teaching, Lowe took a major interest in computer programming and started teaching himself game development. In 1982, Al Lowe created three kids games for the Apple II computer: Troll’s Tale, Bop-A-Bet, and Dragon’s Keep.

The gaming company, Sierra On-Line, liked Lowe’s games and offered to both acquire the games and give Lowe a job. And like that, Al Lowe left his high school teaching career behind to start making video games full time.

While at Sierra On-Line, Al Lowe initially worked on a series of games for kids, including Winnie Pooh in the Hundred-Acre Woods, Mickey’s Space Adventure, and Donald Duck’s Playground. But one of his biggest early projects was The Black Cauldron video game, which he wrote, programmed, and designed.

Lowe worked at Sierra for a total of 16 years and was a part of the creative teams for some of the biggest games of the 1980s and 1990s. His production credits include King’s Quest III, Police Quest I, and, of course, the Leisure Suit Larry series.

One of the early games distributed by On-Line Systems (renamed Sierra On-Line in 1982) was a text-only game called Softporn Adventure (1981). Similar to Zork (1982) and other text-based games of the time, gamers used typed text commands to play the game.

Charles Benton, the creator of Softporn Adventure, never intended to release the game commercially. He just created the game for fun but was encouraged by his friends to independently publish it. While at a computer trade show, Ken Williams, president of Sierra On-Line, acquired a copy of the game. Williams liked Softporn Adventure and decided to release it as part of his company’s software catalog.

The provocative photo on the game’s box was shot at Ken and Roberta Williams’s home and features several naked female Sierra employees and a local waiter in a hot tub.

After losing a license from Disney to produce their games, Al Lowe and Ken Williams discussed making an updated visual version of Softporn Adventure. Lowe used Softporn’s storyline and added 2D graphics, jokes, dialogue, more puzzles, and a protagonist, Larry Laffer. Released in 1987, the updated version of Softporn Adventure was called Leisure Suit Larry in The Land of the Lounge Lizards.

Many Retailers Refused To Sell The Leisure Suit Larry Games

Several large electronics and computer chain stores refused to sell the Leisure Suit Larry games. One of the most noticeable stores on this list was RadioShack. At the time, RadioShack was owned by the conservative Christian, John Roach.

Even though RadioShack had been a major distribution partner for Sierra On-Line, RadioShack employees didn’t even want evaluation copies of the Leisure Suit Larry games sent to them. “They were so scared that they would get caught by John Roach,” said Lowe in a 2014 interview with Esquire.

To help prevent younger gamers from playing Leisure Suit Larry, the game featured an age verification system. Gamers had to answer (5) challenging “adult” questions before being able to play Leisure Suit Larry in The Land Of The Lounge Lizards. The questions asked you to name things like Captain Kangaroo’s sidekick or Annette’s last name from The Mickey Mouse Club.

Younger gamers weren’t the only audience locked out by the age verification quiz. Because the quiz questions were so focused on American culture, International gamers found them to be extremely frustrating.

Between being either too hard to find in stores, to consumers being too embarrassed to buy the game, Leisure Suit Larry in The Land of the Lounge Lizards quickly became one of the most pirated computer games of the 1980s.

Sierra knew something was odd when they started selling a lot of hint books. “At one point we sold more hint books than copies of the game,” Al Lowe recalled.

The end result was thousands of computer users learning how to pirate games; a skill they would use again and again for years to come.

Another reason why some people were hesitant to buy Leisure Suit Larry was a computer virus hoax. A bizarre rumor at the time claimed that your computer would get infected with a computer virus if Larry had unprotected sex with the prostitute in the game.

In reality, if a player visits the prostitute in the game without a condom, then Larry’s genitals start glowing and he dies. A computer STD does NOT get released on your computer. This isn’t something Sierra programmed into their game.

However, the hoax became a self-fulfilling prophecy. Hackers started infecting pirated copies of Leisure Suit Larry with computer viruses. Gamers didn’t need to visit the prostitute in the game to get infected, they just needed to put the floppy disk into their computer. The pirated copies of Leisure Suit Larry quickly infected computers across Europe including Switzerland, The Netherlands, the UK, and West Germany. At one point, the “Larry” virus even infected the European banking system.

A few years later in 1991, the “Larry virus” became a joke in Space Quest IV when an infected copy of Leisure Suit Larry caused the destruction of the Xenonian supercomputer.

There are plenty of hidden and inside jokes in Leisure Suit Larry, including references to some of the people who helped create the game.

Although Leisure Suit Larry in The Land Of The Lounge Lizards didn’t have an advertising budget, Sierra On-Line did try some creative marking ideas to help boost word of mouth. One of their marketing tactics was to include a Leisure Suit Larry branded cocktail napkin inside the game boxes. It was a creative conversation starter.

There’s a Time Limit To The Game

There’s one game scene that even most Leisure Suit Larry veterans have never seen, Larry’s sunrise suicide. Larry has to lose his virginity before dawn. If he doesn’t, he no longer has the will to live anymore.

The reason most gamers have never seen this scene is that most of them have figured out how to safely visit the prostitute above Lefty’s Bar and use a condom. The prostitute encounter will buy you some time, but you still have to complete the game.

Over the years, the various Leisure Suit Larry games have sold over 2 million copies and been honored with several awards. In 1996, the Leisure Suit Larry series was ranked 85th top game of all time by Next Generation magazine. Leisure Suit Larry in the Land of the Lounge Lizards was also given an award for the “Best Adventure, or Fantasy/Role-Playing Program” of 1987 by the Software Publishers Association in 1988. 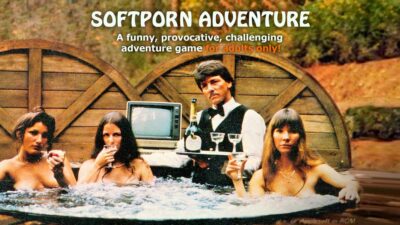 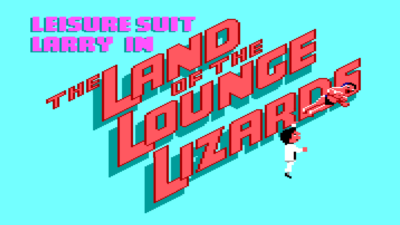 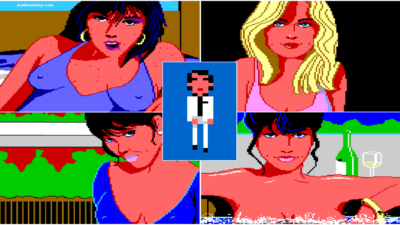