You are here: Home / News / Nirvana Lawsuit Shocker: Why Is Spencer Elden, The Nirvana Baby, Suing The Band?

Spencer Elden, has had enough of people gawking at his penis on the cover of the 1991 Nirvana album Nevermind. In a new Nirvana lawsuit filed this week, he's asking for his penis to be removed from the photo as well as financial compensation.

Nirvana fans got a shock this week when news that the infant on the cover of Nirvana’s 1991 Nevermind album cover, is now suing the band for child pornography. Why now and does the case have any real merit? Here’s everything you need to know about the child pornography Nirvana lawsuit.

Who Is The Naked Baby On The Cover Of Nevermind?

The album cover of Nevermind features a photo of an infant submerged underwater with a dollar bill on a fishhook. The iconic image is now one of the most famous album covers in music history.

But who is the baby? His name is Spencer Elden, and he’s now 30 years old. In 2011, MethodShop had the opportunity to interview Elden and ask him what it was like being the “Nirvana Baby.” One of his biggest complaints at the time was that almost everyone in the world had seen him naked.

What Are The Details Of The Nirvana Lawsuit?

According to Elden’s attorneys at the Marsh Law Firm, Elden alleges that he was “exploited as a child and was never able to give consent when a picture exposing his naked genitals was used on the cover of Nevermind.”

What Does Elden Want From Nirvana?

So what does Elden want from the band Nirvana all of these years later? For starters, he wants the image changed on the album cover.

“Nirvana exploited me when I was a baby to sell their music, but there is a person behind every image,” Elden said in a statement to the media. “I’m just asking the band to do what they should have done 30 years ago and redact my genitals from the image out of respect for my privacy. If the world could forget about it, then maybe I could forget about it too.”

Does Elden’s Child Pornography Nirvana Lawsuit Even Stand A Chance In Court?

The response to this lawsuit has been met with heavy criticism online. In addition to calling the Nirvana lawsuit a joke, social media users think it’s just a desperate attempt to get money. It doesn’t help that the album cover depicts a baby chasing money. Now critics claim that Elden is just a man-baby chasing money.

But criticism aside, does Elden actually have a case? If you take a closer look at his legal team, he just might.

One of Elden’s lawyers is Robert Y. Lewis. Not only does Lewis specialize in child pornography and copyright cases, but according to his profile page on the Marsh Law Firm website, he has an 85% win record. If Elden didn’t have a real case, it’s doubtful that Lewis would have signed on to his legal team.

The Marsh Law Firm also released the following statement this week: “Our client, Spencer Elden never had a choice. Nirvana’s use of our client’s picture in their album cover is nothing less than child exploitation. This is an issue of consent — something that our client never had the opportunity to give.”

Adding additional fuel to Elden’s Nirvana lawsuit is Geffen Record‘s own objections to using Elden’s penis on the album cover. The record company prepared a version of the photo without Elden’s penis, but it was rejected by Kurt Cobain. According to pages 180-181 of Michael Azerrad‘s book about Nirvana, titled “Come As You Are,” the only compromise Cobain would make involved placing a sticker over Elden’s penis that said: “If you’re offended by this, you must be a closet pedophile.” Geffen eventually relented and released the album as Cobain wanted it, with Elden’s penis exposed.

The Pros And (Mostly) Cons Of Being “The Nirvana Baby”

When we interviewed Spencer Elden in 2011, it was obvious that he had a somewhat love/hate relationship with his fame.

As a kid, being the Nirvana Baby made him famous, but it also got him teased. Taunts with the phrases “small penis” and “baby penis” were often used against him by his classmates. Elden eventually ended up at Military School. We don’t know the circumstances that drove that decision, but the negative aspects of his fame were probably a factor.

Then, as he got older, Elden never got a chance to define himself the way he wanted to. If the “Nirvana Baby” wanted to be a classical violinist, CDC researcher, or a math teacher, would people be able to take him seriously? Probably not. He was permanently attached to Nirvana’s image, and it defined everything from his tattoos (he has “Nevermind” tattooed on his chest) to the types of music that he listened to. 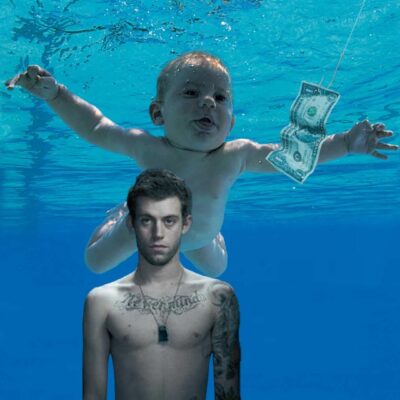 What if over 30 million people owned a picture of your naked body? In this interview, Spencer Elden reflects on what it was like growing up as “The Nirvana Baby.”

The teasing didn’t stop either as he got older, no thanks to social media. Elden tried to participate on platforms like Twitter, but he eventually gave up. His account no longer exists.

You can’t help but wonder what Elden’s life would be like today if he wasn’t the Nirvana Baby. What if, instead of agreeing to throw his baby into the pool, Mr. Elden decided to tell the photographer to never mind?

Find Your Way Home With These 9 Inspirational Quotes From The Wizard Of Oz
Next Post: 30 Employee Farewell Message Examples To Help You Properly Say Goodbye To A Coworker