In the Summer of 1990, this song skyrocketed to #1 on the Irish music charts. It can now be found on every jukebox in an Irish bar. The music video for “I Useta Lover” features cameos from the entire town and some puppets too.

“Whiskey In The Jar” – The Dubliners & Metallica

The song “Whiskey In The Jar” is centuries old and a favorite of musicians around the world. Hundreds of cover versions can be found on iTunes. But The Dubliners version is done in classic Irish style.

If you want a heavier modern style, there’s always Metallica‘s version. The music video takes place at an all-female house party that ends in destruction.

Got a traitor in your circle? This is the Irish song that you creepily whistle to everyone while you hunt them down.

Troy Duffy’s film The Boondock Saints (1999) is a little over the top, but it has some great songs on its soundtrack. “The Blood of Cuchulainn” composed by Mychael Danna definitely gets a slot on this list of St. Patrick’s Day playlist songs.

This mega-hit from 1994 is a protest song about the conflict in Northern Ireland, also known as The Troubles. With hundreds of millions of views, it’s one of the most popular videos in the history of YouTube. Even though the song isn’t about flesh-eating horror film monsters, “Zombie” is also a very popular Halloween playlist song.

“An Irish Pub Song” – The Rumjacks

Celtic punk rock from down under. The Rumjacks are a folk band from Sydney, Australia. The music video for their 2011 hit song, “An Irish Pub Song” introduced The Rumjacks to Europe and The United States. Their popularity status in Irish music has been solidified ever since.

“Sunday Bloody Sunday” is one of U2’s best and most popular songs. But most people don’t know what it’s about. The song details an incident in 1972 called the “Bloody Sunday Incident” where British soldiers in Northern Ireland shot 26 unarmed civilians.

Poor Finnegan. Raise a glass and drink to his “pretty corpse” because that’s not at all really weird, right?

“The Irish Rover” – The Dubliners & The Pogues

“The Spicy McHaggis Jig” is an Irish bar tale about a guy who has an unfortunate one-night stand. This is one of the funnier tracks on this list of St. Patrick’s Day playlist songs.

“High Hopes” is a song by Dublin-based alternative rock quartet Kodaline. The music video tells the story of a couple that finds each other and endures a tragedy.

“Molly Malone” (also known as “Cockles and Mussels” or “In Dublin’s Fair City”) is a popular song, set in Dublin, Ireland, which has become the unofficial city song.

I wish I had a dollar for every time I’ve seen groups of drunk men cry while listening to this song. It’s last on this list on purpose. Save it for the finale of your St. Patrick’s Day Playlist. Celtic Woman does a beautiful job bringing “Danny Boy” to life. 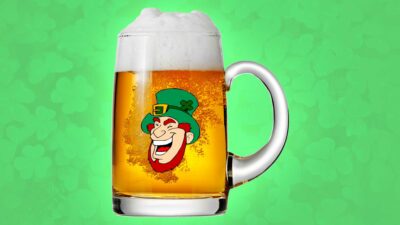 10 Funny Irish Toasts That Are Easy To Memorize

Here are some funny Irish toasts that are easy to memorize. Many of these Irish drinking toasts will work both on St. Patrick’s Day or on a formal occasion, like an Irish wedding.

Read more10 Funny Irish Toasts That Are Easy To Memorize