Steve Jobs vs Bill Gates: How The iPod Created A Microsoft vs Apple Rematch

Apple lost the personal computer war years ago. But the iPod has opened up a new battle between the two tech giants. Can Steve Jobs outmaneuver Bill Gates or will Microsoft beat Apple yet again?

Apple lost the personal computer war years ago. But the iPod has opened up a new battle between the two tech giants. Can Steve Jobs outmaneuver Bill Gates or will Microsoft beat Apple yet again?

When asked about each other’s presence and competition, both Microsoft’s’ Bill Gates and Apple’s Steve Jobs only display a mellow and confined response. Both Jobs and Gates go way back together and have been in a constant battle for share of the market for quite some time now.

Steve Jobs lost the fight years ago with regards to PC distribution and manufacturing. Bill Gates won and continues to win this front by his partnership with an array of manufacturers producing computers able to run the Microsoft Windows operating system.

Can Microsoft Beat the iPod?

However, Apple has flipped the table in this brawl. The PC war is over. Microsoft won. But the home electronics war is just starting. A war Apple was first on the ground for and seems to be able to repel any minor attack. Apple’s combination of iPod and iTunes has been a huge hit with consumers. A true and tried power couple that monopolies the management, purchasing, and portability of your music collection. A technology package doing more today than just playing your MP3s, it’s a calendar manager, contact manager, and now Photo manager. 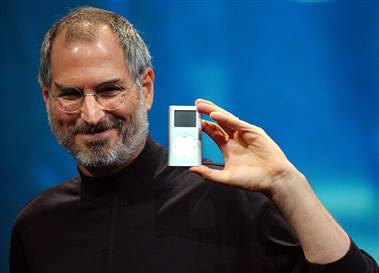 Apple’s proprietary strategy that once initially separated it in the PC market, has unquestionably placed the company on a track towards success. Bill Gates is only left to argue and curse how Apple was able to dominate the space. In his eyes, Apple barely existed anymore. But out of nowhere, Steve Jobs became the leader of the digital music revolution with the birth of the iPod.

Microsoft’s entrance to the music scene was too late. They are now in the catch-up position and will have to mirror Apple’s innovation as it once did with Microsoft Windows. More and more manufacturers will recognize partnership opportunities with Apple much like HP has in the past year, and the domination of iTunes and iPod will strive forward continuously.

Bill Gates, as well as other PC software and computer makers, need to realize the irony in Apple’s success. Apple does not allow third-party companies to manufacture the company’s hardware products. This is the Apple way. It didn’t prove positive for the cheap appeal in personal computing. PCs are cheap. Apple computers are not. And it might have been difficult at first, but years later Apple has perfected their hardware manufacturing process. The Cupertino based company is even creating licensed product distribution opportunities like the HP iPod.

If Apple was to change strategies now, it would almost be like spitting in their own face. Can you imagine if Apple was to sell out now and support WMA music files and other various technologies in its software or products? Apple has always taken a harder and more challenging route. What makes Apple any different now? Does Bill Gates honestly believe that if he had gotten to the iPod or idea of the iPod and iTunes first, that he wouldn’t have done the same thing?