What Comes After A Trillion? – Here’s A Chart Of Enormous Named Numbers

What comes after a Trillion? Here are a list of the largest named numbers and the largest number ever know, Graham's Number.

If you’ve ever overheard some kids “dare” each other to do something, the dare-level quickly escalates from a double-dare to a giant number that they don’t fully understand. Something like “I one-hundred 40 Trillion Billions Millions dare you.” Why? They don’t know what comes after a Trillion? Do you?

Keep reading to learn more about very large numbers, easy ways to remember named numbers, and the answer to the question, “How big is a Google (Googol)?”.

What Are Named Numbers?

Named numbers are number increments so big that they have their own name. For example, Millions, Billions, and Trillions are all named numbers.

What Comes After A Trillion?

A Trillion is a very large number, especially when you’re counting money. You’d need several warehouses just to store a Trillion dollars in cash. Oh, to be a Trillionaire and hace to deal with these types of silly problems.

But the next named number after a Trillion is a Quadrillion. You’d need a bank the size of a large city just to store all of that cash.

While a Million, a Billion and a Trillion are all large numbers, they are tiny compared to massive numbers like a Vigintillion or Googolplex. Here’s a chart of all the named numbers and their scientific notations. Each new number on this list increases the power of 10 by three or more. How many of these large number names do you recognize?

Question: Do you know the names of the other very large numbers that come after a Trillion?
Click To Tweet 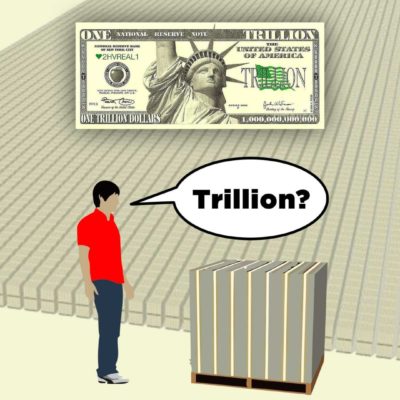 The United States is several TRILLION dollars in debt! But exactly what does a trillion dollars look like?

What About A Zillion?

Even though the word “zillion” is frequently used in pop culture, a Zillion is not a real number. It was just made up by people who don’t know what comes after a Trillion.

A “Google” isn’t a real number. The search engine Google got the inspiration for their name from the number Googol. They just decided to spell it differently. So, when someone wants to know the answer to “How big is Google?”, they probably mean how big is a Googol?

A Googol is a massive number. It is written as the number one followed by 100 zeros.It looks like this:

How Many Zeros In A Googolplex?

How big is a Googolplex? If we are talking about the large number and not the Googleplex building where Google is headquartered, the number Googgoplex is the number 1 followed by 10^100 zeros based on the international number system.

The number is so big that a piece of paper spanning the width of the entire Universe wouldn’t be big enough. Some higher-level mathematics experts even theorize that a Googolplex is bigger than all the atoms in the Universe. It’s so big that there’s currently no known use for it yet in mathematics.

NERD NOTE: Although infinity denotes endlessness, not an actual number. For all practical purposes, a Googolplex and all large numbers bigger than a Googolplex are essentially equal to infinity.

How Long Would It Take To Count To A Googol Or A Googolplex?

If you’re wondering how long it would take to count to a Googol, there’s not much of a point. Just counting to a trillion would take over 30,000 years.

Trying to count to a Googolplex is impossible even if you were immortal. Why? Because the known Universe would die before you’d finish counting. In a Quadrillion years, every last star in the Universe will die. Many billions of years later, black holes will eventually consume all matter in the Universe and then finally evaporate, but you’d still be counting.

What Is The Largest Known Number In Existence?

Despite having more numbers than atoms in the Universe, trying to prove that your integer is bigger than anyone else’s integer has continued through the centuries. The biggest number referred to regularly is a Googolplex, which works out as 1010^100.

But, mathematicians love to invent numbers with large values and give them their own names. For example, mathematician Stanley Skewes named a number even bigger than Googolplex, called Skewes’ Number. However, Graham’s Number is currently considered to be the world’s largest known number. In fact, Graham’s Number is so big that it can’t be written with conventional notation.

What Comes After A Trillion? – A Quadrillion!

So, what comes after a Trillion? Now you know the answer. It’s a Quadrillion! Just imagine being a Quadrillionaire! What would you do with all of that money? Where would you keep it?

What Comes After A Trillion? – What’s the highest number known to man? Here’s some large number trivia.
Click To Tweet

These Researchers Taught A Robot How To Peel A Banana Like A Human
Next Post:Why Generation Z Is Deleting Instagram For The BeReal App