No company has achieved the level of DLC success that Rockstar Games has with Grand Theft Auto Online. How did Rockstar do it? They went against the industry standard and made GTA Online's DLC 100% free.

Downloadable content (DLC) is a massive market within the AAA games industry. Users can download additional content including season passes, pre-order bonuses, expansion packs and ‘Game of the Year’ editions to enhance existing software. Savvy gaming companies have used DLC as much as a device for marketing as for a product in and of itself.

And yet, in their attempts to reach a wider and wider audience with a myriad DLC pricing variations, no company has achieved the level of DLC success that Rockstar Games has with Grand Theft Auto Online. How did Rockstar do it? They went against the industry standard and made GTA DLC 100% free.

Depending on the game, extra downloadable content can often cost millions of dollars to produce. So how can companies like Rockstar Games distribute DLC for free? They’ve been doing it for the last three years. And GTA Online continues to be one of the most popular, and most profitable, games available today.

But how do you make a profit by giving away free content? For example, the GTA Online Gunrunning update was incredible and probably costs millions to produce. So how do they money? Easily, or so it seems.

Pairing a game made ever-fresh through new content with what amounts to being one of the simplest and most fair microtransaction models is the golden recipe here.

GTA Online doesn’t pull any of the usual freemium stunts with multiple in-game currencies, some of which are exclusively available through paid means. Nor does it make earning in-game cash disproportionately difficult. No, players who engage in microtransactions by purchasing “Shark Cards” do not get any advantages over those who do not.

They do not get exclusive items nor can player ranks or stats be bought. Aside from some unscrupulous exploits that are confined to the PC and last-generation console versions of the game, it is also not possible to conjure $GTA out of thin air. Cheats included. That said, the single-player story mode version of the game does have the usual range of codes you’d expect from a Grand Theft Auto title.

In fact, despite having a reputation for hiking prices way, way up, GTA Online is only slightly above the average MMO ratio of cost/time to make in-game money.

Sure, it will take a tad more grinding than most other games to get high-end goods. But there are so many guides out there that you have no excuse not to do things in an efficient and simultaneously fun manner.

Recent DLCs like Import/Export have made earning money even quicker and easier. At this point, it doesn’t take unreasonable amounts of time to make in-game fortunes. And it’s much easier with some skill and a good team of friends.

However, free DLC needs to be funded somehow. Rockstar has extended the opportunity for players to purchase in-game currency. They can decide what they value more: their time or their money.

Purchasing currency nets you the exact same kind of $GTA that you earn through missions too, so there is no content in the game made unavailable to non-paying players.

This aspect of free DLC is key to its success. Paid DLC in multiplayer environments ends up dividing the player-base, which has a negative impact on almost every sense. Whereas in GTA Online, everyone always has access to the same content. This way when a new update is released, the new content is added for all players alike, regardless of whether they’ve paid up to that point.

The additional content is what drives microtransaction sales, meaning there is a greater chance to convert new customers.

So why did we write all that about making money in the game and microtransactions?

The connection is simple: you can buy money in GTA Online, which is how free DLC is funded. More free DLC drives more microtransaction sales, funding more free DLC and so on and so on. It’s a positive feedback loop in terms of profit, really, which is something any game developer would want to strive towards. 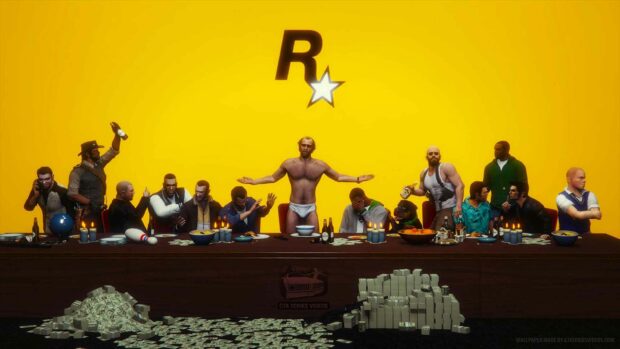 At the end of the day, this means that the free DLC will keep coming until such a time that players stop buying it, and by the looks of things that won’t happen soon.

The game still has massive appeal, as it has sold over 5 million copies between February and May 2017 as per the recent investor call. All those new players represent potential new microtransaction customers since like everyone else, they too have access to all the free DLC.

Rockstar has managed to play its cards perfectly. They’ve created a highly profitable system that grows itself, so to say. Word-of-mouth publicity works wonders when there are 80 million mouths spreading the word. At this point, Rockstar Games barely needs to move a finger to successfully launch new games.

And then there is another clear sign that the system working: revenue from microtransactions. Over a year ago, Shark Cards alone made more than $500 million in profit. And in the time since, that number has most likely doubled.

There no reason to fear that the free DLC in GTA Online will cease anytime soon. It’s far too profitable to be shut down, but hey, that’s good for us players since it means more content!

The Ultimate Onslaught 2 Combos List For Hardcore Players
Next Post: Woman Tries To Take Selfie At Gallery, Destroys $200,000 Worth Of Art